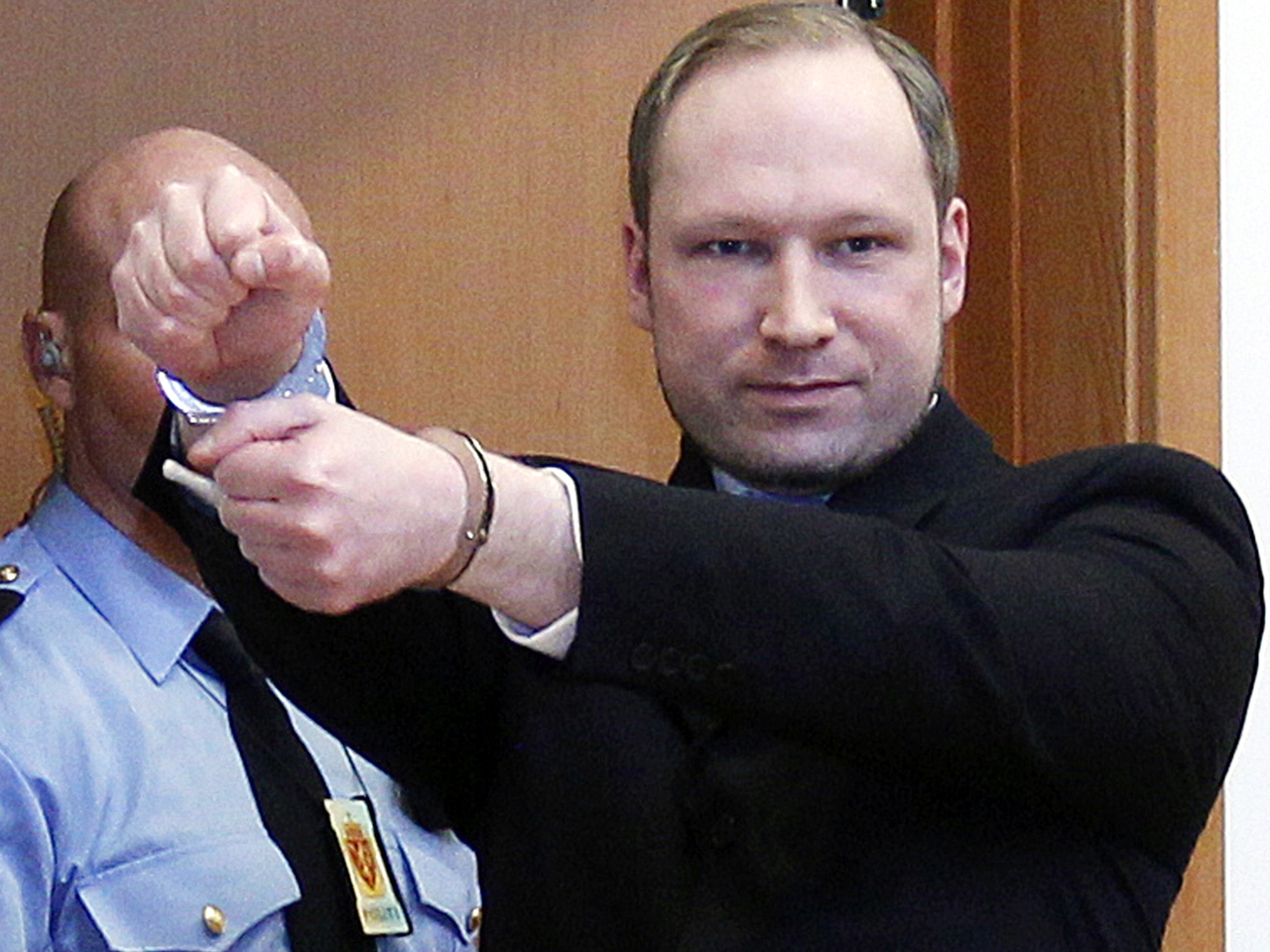 OSLO, Norway - The right-wing extremist who has admitted killing 77 people in Norway's worst peacetime massacre told a court Monday that he deserves a medal of honor for the bloodshed and demanded to be set free.

Anders Behring Breivik smirked as he was led in to the Oslo district court, handcuffed and dressed in a dark suit, for his last scheduled detention hearing before the trial starts in April. He stretched out his arms in what his lawyer Geir Lippestad called "some kind of right-wing extremist greeting."

Reading from prepared remarks, the 32-year-old Norwegian told the court that the July 22 massacre — carried out with a bomb, a rifle and a handgun — was a strike against "traitors" who he said are embracing immigration to promote "an Islamic colonization of Norway."

Like in previous hearings, Breivik admitted to setting off the bomb outside the government headquarters in Oslo and opening fire at a Labor Party youth camp on Utoya island, outside the capital. But he again denied criminal responsibility for the deaths and rejected the authority of the court.

Some 100 survivors and victims' relatives watched in disbelief as Breivik asked to be released and then told the judge he should receive a military honor for the attacks. Many survivors had expressed concern that Breivik will use court hearings to draw attention to his extremist views.

"It wasn't good that he got to say what he wanted to say," said Amel Baltic, a 16-year-old survivor of the Utoya massacre. "It made me irritated."

Judge Wenche Gjelsten ordered Breivik to remain in custody until the trial begins on April 16. Breivik faces terror charges that carry up to 21 years in prison, but if he's deemed to be gravely mentally ill he will be sent to psychiatric care.

A psychiatric evaluation found Breivik criminally insane, but a second evaluation was ordered amid criticism of that diagnosis. Breivik has refused to cooperate with psychiatrists in the second review.

Unlike the only previous public hearing, Breivik this time agreed to let himself be photographed before the proceedings began. Lippestad, the defense lawyer, suggested Breivik's remarks Monday foreshadowed what's to come in his trial.

"It's a preparation for the trial. Much of this case is about his personality," Lippestad said.

Breivik claims he's a commander of a militant organization aiming to overthrow European governments and replace them with "patriotic" regimes that would deport Muslim immigrants.

In a 1,500-page manifesto posted online just before the attacks, Breivik described this supposed network as a modern-day version of the "Knights Templar" order of medieval crusaders. The document contained details on initiation rites, oaths and a "clenched fist salute" symbolizing "strength, honor and defiance against the Marxist tyrants of Europe."

Police have not found any trace of the group and say Breivik carried out the attacks on his own.

Since investigations began, about 1,500 people have been questioned, including survivors, police said Monday.

Law enforcement agencies in other countries have also assisted, including in the United States, where authorities interviewed Breivik's sister in Los Angeles.

Police prosecutor Christian Hatlo told The Associated Press that a request for further assistance was recently sent to the U.S. Department of Justice. He said investigators were looking for information on Breivik's "travels and financing."