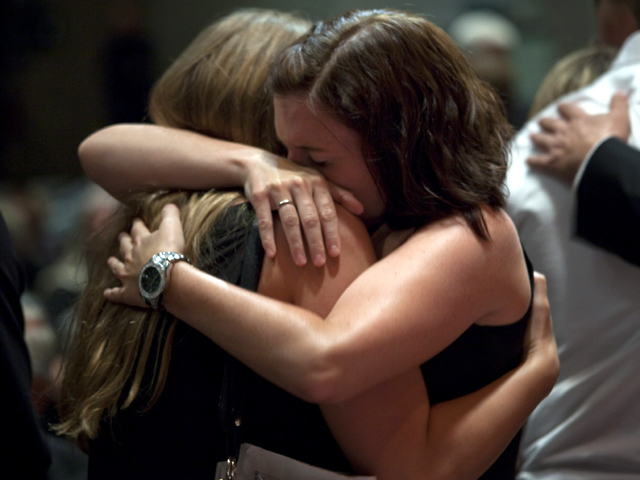 OSLO - A person who was wounded in last week's terrorist attacks in Norway has died, raising the death toll from the massacre to 77.

Henning Holtaas, a police attorney, said Friday the unidentified victim died at a hospital of wounds he suffered during the shooting rampage on Utoya island.

Norwegian extremist Anders Behring Breivik has admitted conducting the shooting rampage on Utoya that has killed 69 people and setting off a bomb in central Oslo that killed eight.

Norway began burying the dead on Friday, a week after the attacks. Mourners of all ages vowed they would not let the massacre threaten their nation's openness and democracy.

An 18-year-old Muslim girl was the first victim to be laid to rest since the gunman opened fire at a political youth camp and bombed the government headquarters in Oslo.

After a funeral service in the Nesodden church outside the capital, Bano Rashid, a Kurdish immigrant from Iraq, was buried in a Muslim rite. Sobbing youth accompanied her coffin, which was draped in a Kurdish flag.

The attack will "not destroy Norway's commitment to democracy, tolerance and fighting racism," Labor Party youth-wing leader Eskil Pedersen said at a memorial service in Oslo.

Pedersen, who was on the island retreat of Utoya when the gunman's attack began, said: "Long before he stands before a court we can say: he has lost."

Pedersen said the youth organization would return to Utoya next year for its annual summer gathering, a tradition that stretches back decades.

Police said all those killed in the July 22 terror attacks in Oslo and on Utoya have now been identified and those reported missing have been accounted for.

Norway's Police Security Service said the threat from right-wing extremists remains unchanged after Breivik's attack. It said the 32-year-old Norwegian's actions lack parallels in Europe or elsewhere, his views differ from the ideology of most racist and neo-Nazi groups, and very few people in Norway are capable of replicating what he did.

Since the massacre, questions have persisted about whether authorities had underestimated extremist dangers in Norway.

At Friday's memorial service in Oslo at the assembly hall of the "People's House," a community center for Norway's labor movement, Prime Minister Jens Stoltenberg said: "Today it is one week since Norway was hit by evil."

The bullets struck dozens of members of the youth faction of his Labor Party, but they were aimed at the entire nation, Stoltenberg said, on a stage adorned with red roses, the symbol of his party.

"I think July 22 will be a very strong symbol of the Norwegian people's wish to be united in our fight against violence, and will be a symbol of how the nation can answer with love," he told reporters after the ceremony.

Members of the audience raised bouquets of flowers as each speaker took the stage, and some of them fought back tears as they spoke.

Later, Stoltenberg spoke at a Muslim memorial service in Gronland, an immigrant neighborhood in Oslo. The prime minister called for unity across ethnic and religious lines, a message he has repeated many times since the attacks.

Breivik, a vehement anti-Muslim, was questioned by police Friday for the second time since surrendering to an anti-terror squad on Utoya, where his victims lay strewn across the shore and in the water. Many were teens who were gunned down as they tried to flee the onslaught.

In a 1,500-page manifesto released just before the attacks, Breivik ranted about Europe being overrun by Muslim immigrants and blamed left-wing political forces for making the continent multicultural.

Police attorney Paal-Fredrik Hjort Kraby said the Breivik remained calm and cooperative during the questioning session, in which investigators reviewed with him his statements from an earlier session on Saturday. Investigators believe Breivik acted alone, after years of meticulous planning, and haven't found anything to support his claims that he's part of an anti-Muslim militant network plotting a series of coups d'etat across Europe.

Breivik has confessed to both attacks but denies criminal guilt because he believes he's in a state of war, his lawyer and police have said.

Police have charged Breivik with terrorism, which carries a maximum sentence of 21 years in prison. However, it's possible the charge will change during the investigation to crimes against humanity, which carries a 30-year prison term, Norway's top prosecutor Tor-Aksel Busch told The Associated Press.

"Such charges will be considered when the entire police investigation has been finalized," he said. "It is an extensive investigation. We will charge Breivik for each individual killing."

Prosecutors can also seek a special kind of sentence that would enable the court to keep Breivik in prison indefinitely. A formal indictment isn't expected until next year, Busch said.

A weapons supplier in Norway confirmed his company sold device that enables quick loading of magazines for a rifle and four 30-round clips for a Glock 17 pistol to Breivik, who ordered the equipment online in November and December last year.

Flemming Mark Pedersen, owner of Capsicum Solutions AS, said the purchase was legal and there was no indication of what Breivik was up to.

"But just like the police officer who approved his (gun) license, the company that provided him with fertilizer and the firm that sold him diesel, we feel guilty to a certain level and wonder whether this could have been prevented in some way," Pedersen told The Associated Press.

Since the attacks, immigrants and ethnic Norwegians have come together in grief for the victims, and with disdain for the attacker and his motives. A sometimes divisive debate about immigration has been put aside.

So many roses have been placed at makeshift memorials around Oslo and other Norwegian cities that domestic suppliers cannot keep up with demand. The government has suspended a tax on foreign roses to allow for more imports between July 26 and Aug. 2, Norwegian news agency NTB reported.