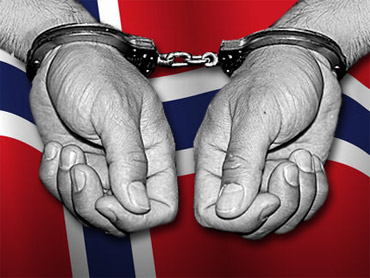 Three suspected al Qaeda members were arrested Thursday for what Norwegian and U.S. officials said was a terrorist plot linked to similar plans to bomb New York's subway and blow up a shopping mall in England.

Officials believe the men were planning attacks with portable but powerful bombs like the ones at the heart of last year's failed suicide attack in the New York City subway, an attack U.S. Attorney General Eric Holder has called one of the most serious plots since the Sept. 11, 2001, terrorist attacks. On Wednesday, U.S. prosecutors revealed the existence of a related plot hatched in Manchester, northwest England.

The plots underscore al Qaeda's interest in smaller-level attacks that don't require the intricate planning and coordination of Sept. 11, in which airplanes were hijacked and flown into the World Trade Center towers in New York City and the Pentagon in Arlington, Virginia. And they follow a trend in which the terrorist group has used operatives inside potential target countries, rather than trying to sneak people across increasingly secure borders.

The three men had been under surveillance for more than a year. Two were arrested in Norway. A third was captured in Germany, where he was vacationing, the Frankfurt general prosecutor's office said.

Those arrested in Norway included a 39-year-old Norwegian of Uighur origin who has lived in the country since 1999 and a 31-year-old citizen of Uzbekistan who had a permanent Norwegian residency permit, said Janne Kristiansen, head of Norway's Police Security Service. The man arrested in Germany is a 37-year-old Iraqi with a Norwegian residency permit, Kristiansen said. German authorities were preparing to extradite him to Norway in the coming weeks.

Kristiansen did not say exactly where the arrests took place but said all three men "had connections to Oslo."

Norwegian and U.S. officials believe the Norway plan was organized by Salah al-Somali, al Qaeda's former chief of external operations who is in charge of plotting attacks worldwide. Al Qaeda usually keeps its plots compartmentalized, and officials do not believe the suspects in Norway knew about the other plots. The officials spoke on condition of anonymity because they were not authorized to discuss the case.

Al-Somali, who was killed in a CIA drone airstrike last year, has been identified in U.S. court documents as one of the masterminds of the New York subway plot. Two men have pleaded guilty in that case, admitting they planned to detonate explosives during rush hour. A third man awaits trial.

Officials said the men were attempting to make peroxide bombs, the powerful homemade explosives that prosecutors say were attempted in both New York and England. Norwegian and U.S. officials said it was unclear whether the men ever perfected the recipe for the bomb and said investigators had contained the plot.

"According to our evaluation, the public has never been at risk," Kristiansen said.

The Associated Press learned of the investigation in recent weeks and approached U.S. and Norwegian officials. Authorities told the AP that reporting on the case could jeopardize public safety and allow dangerous suspects to go free. The AP agreed not to report on the investigation until arrests were made.

"AP's knowledge of the case was only one of several factors that was taken into consideration when deciding on the timing of the arrests," Police Security Service spokesman Trond Hugubakken said. "It was not the decisive factor."

U.S. and Norwegian counterterrorism officials worked closely together to unravel the Norwegian plot, officials said. Kristiansen traveled to the U.S. this spring to discuss the closely held intelligence gathered in the case.

Norwegian Prime Minister Jens Stoltenberg urged Norwegians not to judge large groups of people because of the arrests.

"These are separate individuals that are responsible for criminal acts," Stoltenberg said. "It is always bad to judge a whole group of people from what individuals are doing and that is independently of what group these people belong to."

Even though it was not clear if Norway was a target, Al Qaeda's No. 2 leader, Ayman al-Zawahri, has called for attacks on Norway, among other countries.

Two of the men indicted Wednesday in the U.K., Abid Naseer and Tariq Ur Rehman, were linked to a previously undisclosed companion plot in England.

The third man named in Wednesday's indictment was Adnan Shukrijumah, who was on the FBI's list of most-wanted terrorists and is thought to have been a key al Qaeda planner.

Shukrijumah allegedly committed the crime of recruiting Najibullah Zazi to bomb New York City's subways, reports CBS News national security correspondent David Martin. He is also accused of being at the center of an almost identical plot to bomb a shopping mall in England.

Although Shukrijumah, 34, has been among the FBI's most sought after suspects for about seven years, this is the first time that formal, public charges have been levied against him, reports CBS News producer Phil Hirschkorn. However, the scope of the charges against Shukrijumah, compared to his large al Qaeda profile, are rather small, limited to actions in the 16 months covering the time frame of the Zazi-led NYC subway plot, from Sep. 2008 to Jan. 2010.

In Washington, Justice Department spokesman Dean Boyd had no comment on the arrests made in Norway.

Magnus Norell, a terrorism expert at the Swedish Defense Research Agency, said Norway's 500 troops in Afghanistan could be a factor, as could the 2006 controversy sparked by a Danish newspaper's publication of 12 cartoons depicting the Prophet Muhammad.

Norell said the controversy has extended to neighboring Norway and Sweden after newspapers there republished the cartoons and later published similar cartoons. Images of Muhammad, even favorable ones, are considered blasphemous by many Muslims.

British police and security officials have never provided details of the alleged target of the purported English plot, but said it was likely focused on a major shopping center in northern England. Media speculation centered on Manchester's Arndale shopping center.

A judge said last year the gang was plotting a "mass casualty" attack in northern England.