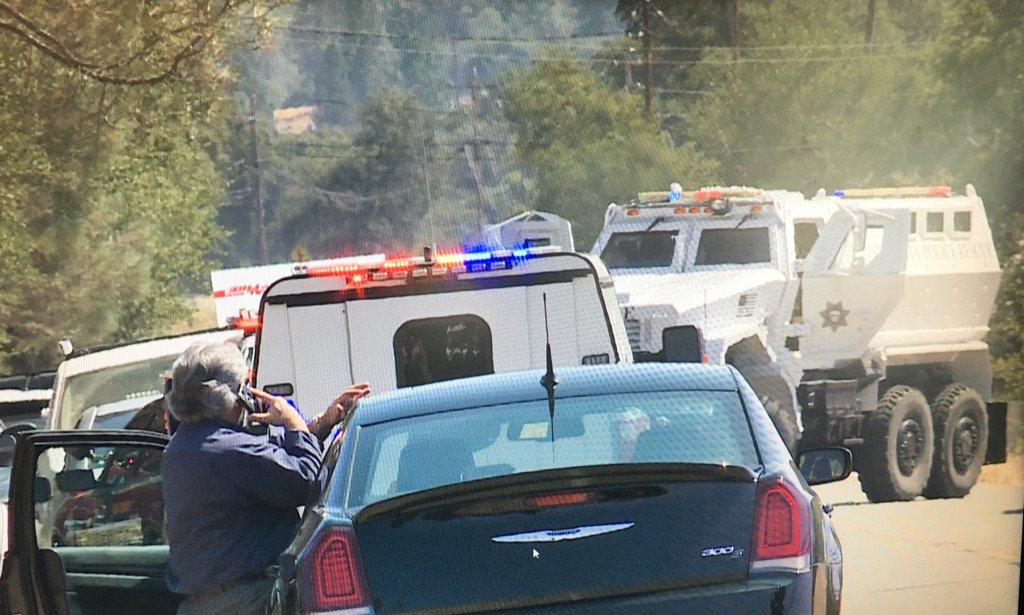 DOBBINS, Calif. -- A man was found dead inside a rural home Tuesday after he shot and wounded two California sheriff's deputies who confronted him as he pulled up marijuana plants on a farm that supplies pot to a Rastafarian church, authorities said.

During a press conference Tuesday, Yuba County Sheriff Steven Durfor said a man matching the description of the person who shot deputies was found dead in a rural home, CBS Sacramento reports. The scene is along Marysville Road, near the communities of Oregon House and Dobbins -- about 55 miles north of Sacramento. Authorities are treating the area as still active.

The incident began around 8:30 a.m. when a deputy described as a 14-year veteran of the department responded to the report of a disturbance over marijuana plants on a farm that supplies pot to a Rastafarian church. He arrived at the scene and tried to sort out the disturbance, but was unable to locate the suspect.

A short time later, a second deputy, described as a 10-year veteran of the department, arrived at the scene spotted a man who matched the description of the suspect running toward a residence about 100 yards up the hill.

Around 9:35 a.m., a third deputy, described as a 22-year-veteran, arrived at the scene and joined the two other deputies in their search.

The first two deputies went to the front door of the home, while the third when to the back to cover the back door. The two talked to the resident inside and were granted permission to search the home -- although the resident didn't think anyone was inside. After clearing the residence, they got into a gunfight with the suspect. The suspect hit the 14-year deputy once in the lower pelvis and thigh. The 10-year veteran was shot once in the arm and possibly a second time.

The 22-year veteran reported the deputies were down. He went inside the residence twice and got the deputies out.

Durfor said the two wounded deputies were airlifted to a hospital and arrived "conscious, talkative and stable." The pair, whose names were not released, were in serious condition and underwent surgery, according to the hospital.

Four separate SWAT teams responded to the scene. Around 2 p.m. SWAT members went inside the residence and found the suspect dead of gunshot wounds. A preliminary investigation suggests the suspect died from gunshot wounds he received during the shootout with the two deputies.

Sugarleaf Rastafarian Church leader Heidi Lepp said she received a call from church members who live on the marijuana farm saying a newly arrived worker had become erratic, was ripping up plants and holding a gun.

Lepp said she called the sheriff's office and told the men on the farm to leave immediately.

Lepp said she knows the suspect only as "Sawyer" and he showed up at the farm about a month ago. The property is owned by a branch of Lepp's church, she said.

The property is between 20 and 40 acres, Lepp said, and the church considers marijuana a sacrament.

The shooting occurred a day after two police officers were shot and wounded nearly 200 miles south in the central California city of Los Banos during a struggle with a man who broke into his estranged wife's apartment. Police fatally shot that shooter.