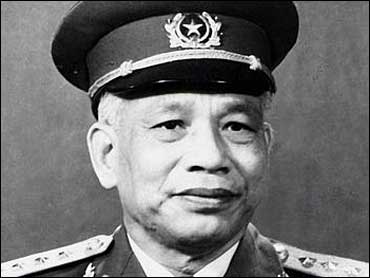 After a formal state funeral Thursday, he will be buried at the Mai Dich Cemetery on the outskirts of Hanoi, reserved for the highest ranking Communist Party and government officials, Vietnam Television announced.

Part of an elite handful of revolutionaries who masterminded Vietnam's war of independence against France, Dung was named Hanoi's military chief of staff in 1953 and went on to fight against American forces during the Vietnam War.

Dung headed the final communist offensive against U.S.-backed South Vietnam in the spring of 1975. The war came to an end on April 30 of that year as North Vietnamese tanks rolled through the gates of the Presidential Palace in Saigon, South Vietnam's capital.

Dung's military reputation in Vietnam stands second only to battlefield legend Gen. Vo Nguyen Giap, who along with Ho Chi Minh and Pham Van Dong were considered the architects of the nation's communist revolution.

Dung replaced Giap as defense minister in 1980 and was an advocate of a large standing army.

Criticized from within the army for his autocratic style and rumors of family corruption, he was replaced in 1987 during a cabinet shuffle.

Dung was born in 1917 in Hanoi and joined the communist party in 1937. He is survived by his two sons and three daughters.