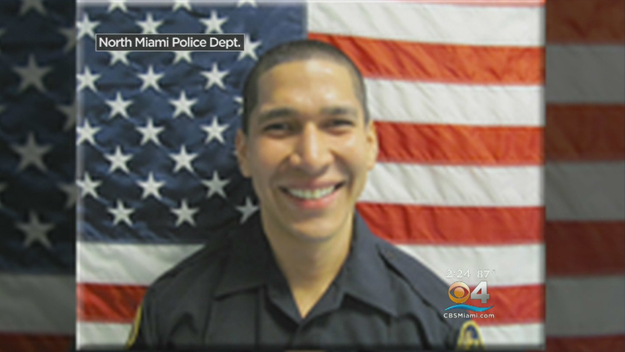 NORTH MIAMI, Fla. -- City officials have identified the North Miami officer who shot an unarmed black caregiver and say another officer is suspended for making "conflicting statements" about the shooting, reports CBS Miami.

Aledda, who is Hispanic, has been placed on paid administrative leave while the shooting is investigated.

A union official has said the officer was aiming for the autistic man because he thought he was a threat, but the officer missed and hit Kinsey.

Kinsey, 47, says he was telling the officers he was unarmed and that his patient was holding a toy truck when an officer fired three times, striking Kinsey in the leg. After the shooting, Kinsey said he asked an officer why he was shot and the officer said "'I don't know.'"

Police said officers responded after getting a 911 call about a man with a gun threatening to kill himself, and the officers arrived "with that threat in mind" - but no gun was recovered.

Dade County Police Benevolent Association president John Rivera said Thursday that the officer who fired did not hear what Kinsey was saying, reports CBS Miami.Rivera said the officer thought that the autistic man was attempting to harm Kinsey.

Though Kinsey is heard speaking in the cellphone recording, Rivera said the officers were further away than the person who recorded the incident.

In dispatch audio obtained by CBS Miami, an officer is heard saying "He's loading up his weapon," apparently referring to the autistic man who was holding a toy truck.

The Florida Department of Law Enforcement is investigating and will turn their findings over to the state's attorney's office.

Kinsey was reportedly released from the hospital Thursday.