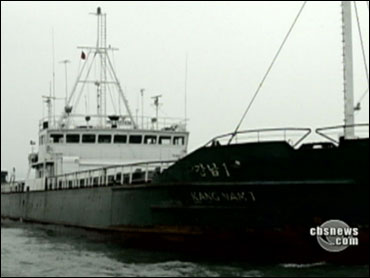 The North Korean ship Kang Nam has turned around and is heading back toward the south coast of China, reports CBS News national security correspondent David Martin.

The ship, which left a North Korean port on June 17, is the first vessel monitored under U.N. sanctions that ban the regime from selling arms and weapons-related material.

It is currently in the vicinity of the Parcel Islands 100 miles off Vietnam, Martin reports, adding that there is no specified reason as of now for why it has changed course.

"With still no long range missiles on the launch pads and no time to get them ready for a July 4 launch, it would appear the temperature is being lowered," Martin said of North Korea's threats to launch missiles at Hawaii on the U.S.'s Independence Day.

"If the ship is on its way back, it would mean that Resolution 1874 is taking effect and causing the North to retreat," Kim Tae-woo, vice president of the Korea Institute for Defense Analyses, told the Korea Herald.

The U.S. ambassador to the United Nations, Susan Rice, said on CBS' "Face the Nation" that Washington is "following the progress of that ship very closely." Rice would not say whether the U.S. would confront the Kang Nam.

North Korea has said it would consider any interception of its ships a declaration of war.

On Monday, Myanmar's authorities told the North Korean ambassador they
won't allow the Kang Nam 1 to dock if it is carrying weapons or other banned materials, a Radio Free Asia report said.

Myanmar authorities also told the ambassador last week that they would search the ship if its enters its waters, the U.S. government-funded RFA reported Monday from Washington, citing an unidentified senior diplomat from the Southeast Asian nation.