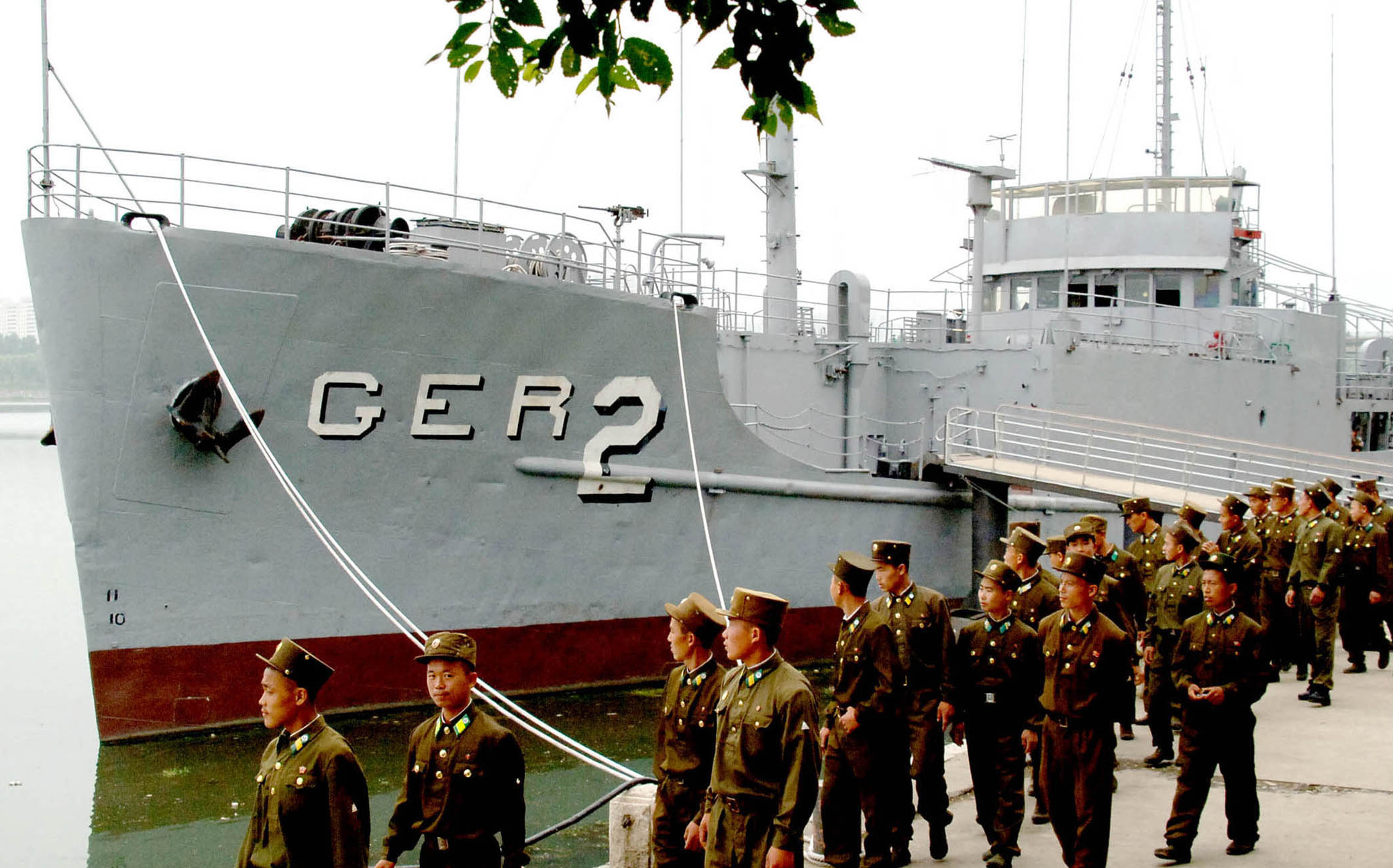 PYONGYANG, North Korea If there was ever any doubt about what happened to the only U.S. Navy ship that is being held by a foreign government, North Korea has cleared it up. It's in Pyongyang. And it looks like it's here to stay.

With a fresh coat of paint and a new home along the Pothong River, the USS Pueblo, a spy ship seized off North Korea's east coast in the late 1960s, is expected to be unveiled this week as the centerpiece of a renovated war museum to commemorate what North Korea calls "Victory Day," the 60th anniversary this Saturday of the signing of the armistice that ended hostilities in the Korean War.

CBS News' Seth Doane was allowed inside the communist country to report on the anniversary.

On Thursday, Doane witnessed the grand opening of a cemetery for veterans. In the crowd, CBS News spotted retired U.S. Navy pilot Thomas Hudner. Hudner traveled to North Korea this week on a personal mission to search for the remains of his wingman, killed during the Korean War.

Hudner called the experience "rather emotional."

The USS Pueblo is North Korea's greatest Cold War prize. Its government hopes the Pueblo will serve as a potent symbol of how the country has stood up to the great power of the United States, once in an all-out ground war and now with its push to develop the nuclear weapons and sophisticated missiles it needs to threaten the U.S. mainland.

Many of the crew who served on the vessel, then spent 11 months in captivity in North Korea, want to bring the Pueblo home. Throughout its history, they argue, the Navy's motto has been "don't give up the ship." The Pueblo, in fact, is still listed as a commissioned U.S. Navy vessel, the only one being held by a foreign nation.

But with relations generally fluctuating in a narrow band between bad to dangerously bad, the United States has made little effort to get it back. At times, outsiders weren't even sure where North Korea was keeping the ship or what it planned to do with it.

Requests for interviews with the captain of one of the North Korean ships involved in the attack were denied, and officials here have been tight lipped about their plans before the formal unveiling.

The Pueblo incident is a painful reminder of miscalculation and confusion, as well as the unresolved hostilities that continue to keep the two countries in what seems to be a permanent state of distrust and preparation for another clash, despite the truce that ended the 1950-1953 war.

Already more than 40 years old and only lightly armed so it wouldn't look conspicuous or threatening as it carried out its intelligence missions, the USS Pueblo was attacked and easily captured on Jan. 23, 1968.

Surrounded by a half dozen enemy ships with MiG fighter jets providing air cover, the crew was unable to put up much of a fight. It scrambled to destroy intelligence materials, but soon discovered it wasn't well prepared for even that.

A shredder aboard the Pueblo quickly became jammed with the piles of papers anxious crew members shoved into it. They tried burning the documents in waste baskets, but smoke quickly filled the cabins. And there were not enough weighted bags to toss all the secret material overboard.

One U.S. sailor was killed when the ship was strafed by machine gun fire and boarded. The remaining 82, including three injured, were taken prisoner. The North Koreans sailed the Pueblo to the port of Wonsan.

For the survivors, that's when the real ordeal began.

"I got shot up in the original capture, so we were taken by bus and then train for an all-night journey to Pyongyang in North Korea, and then they put us in a place we called the barn," said Robert Chicca of Bonita, Calif., a Marine Corps sergeant who served as a Korean linguist on the Pueblo. "We had fried turnips for breakfast, turnip soup for lunch, and fried turnips for dinner. ... There was never enough to eat, and personally I lost about 60 pounds over there."

Although the ship was conducting intelligence operations, crew members say that most of them had little useful information for the North Koreans. That, according to the crew, didn't stop them from being beaten severely during interrogations.

"The Koreans basically told us, they put stuff in front of us, they said you were here, you were spying, you will be shot as spies," said Earl Phares from Ontario, Calif., who was cleaning up after the noon meal in the galley when the attack began. "Everybody got the same amount of beatings in the beginning."

North Korea said the ship had entered its territorial waters, though the U.S. maintained it was in international waters 15 miles off the nearest land.

The incident quickly escalated. The U.S., already deeply embroiled in the Vietnam War, sent several aircraft carriers to the Sea of Japan and demanded the captives be released. Just days before the attack, North Korean commandos had launched an assassination attempt on South Korea's President Park Chung-hee at his residence.

North Korea responded by putting members of the crew before cameras to confess publicly. The crew members planted defiant codes into forced letters of confession and extended their middle fingers in images sent around the world. That led to further beatings when the North Koreans figured out the gesture's meaning.

On Dec. 21, 1968, Maj. Gen. Gilbert H. Woodward, the chief U.S. negotiator, signed a statement acknowledging that the Pueblo had "illegally intruded into the territorial waters of North Korea" and apologizing for "the grave acts committed by the U.S. ship against" North Korea. Both before and after, he read into the record a statement disavowing the confession.

The hostages were released across the Demilitarized Zone that divides the two Koreas two days before Christmas - 335 days after their capture.

The Navy considered a court-martial for the ship's captain, Cmdr. Lloyd M. "Pete" Bucher, for letting the Pueblo fall into enemy hands without firing a shot and for failing to destroy much of the ship's classified material. But he was never brought to trial. John H. Chafee, secretary of the Navy at the time, said Bucher and the other crew members "had suffered enough."

To this day, members of the Pueblo crew say Bucher made the right decision, though years later his second-in-command publicly questioned Bucher's decisions not to fight.

"It would have been nice to take out some of the guys, some of them, and maybe go down fighting, but it would have been total suicide," said Phares. "We never thought anything would happen, and we weren't supposed to create an international incident."

In 2002, former U.S. Ambassador to South Korea Donald P. Gregg said a North Korean foreign ministry official hinted at a deal to return the Pueblo. But when he later visited Pyongyang, he said he was told the climate had changed and a return was no longer an option.

In January the next year, Colorado Sen. Ben Nighthorse Campbell reintroduced a resolution in Congress asking North Korea to return the ship. There has been no progress since, however, at least none that has been made public.

"The ship was named after Pueblo, Colorado, and they would have loved to have the ship back," Chicca said. "It's very disappointing to have it still there, and still being used as anti-American propaganda."

The planned display of the ship by North Korea hangs over the heads of the crew members who have long campaigned for its return.

"I'll never give up, but I don't think it's ever coming back," Phares said. "It's just unfortunate that we got put in that situation, and that the top brass blamed us, or blamed Bucher, for everything."