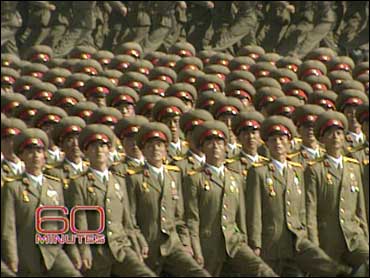 North Korea has been called many things ? the Hermit Kingdom, the most isolated country in the world, an outlaw nation, an exporter of terrorism, part of the "axis of evil." It?s been on a war footing with the United States for more than 50 years.

Few outsiders, and even fewer journalists ever get a chance to go to North Korea and see first-hand some of what is happening there. 60 Minutes correspondent Dan Rather got that chance recently.

And even though the 60 Minutes team couldn't go anywhere or do anything without two full-time official government guides, they saw people, things and events that sometimes frightened them and were always surprising.


The first thing that caught our attention in the capital, Pyongyang, was the traffic police. Well dressed and impeccably groomed, they display almost no emotion as they pirouette in a city that's so poor and so short on electricity there aren't any traffic lights most of the year. The police are in perpetual motion, working with an almost robotic precision. All of which is rather odd because there isn't much traffic. People can't afford cars.

And, unlike in China and Vietnam, they can't afford bikes, either. We saw only a few. Most people have to walk to their jobs. We weren't allowed to visit any offices or see anyone at home. You can be locked up in Pyongyang for letting a stranger into your home. We asked for, and were denied, permission to go to a food market. No reason was given, though the government is known to be very defensive about widely reported food shortages.

We could see that air pollution is becoming a problem because of factories and the power plant. One of the streets made us think for a moment we were in Paris. But there's nothing romantic about this city: everything seemed structured, organized and very clean. We never saw one scrap of paper on the sidewalks. The government assigns workers to keep them clean and also decrees who gets to live here. It's a privilege, reserved for strong supporters of the regime.

We saw some of the true believers erecting signs. The signs said "60." It wasn't a welcoming party for 60 Minutes - you can't watch our broadcast here. It's almost impossible to see any foreign TV broadcasts. As for the "60"? Well, we were there when the country was celebrating its 60th birthday.

In the main square, the government was eager to let us take all the pictures we wanted at the gigantic military parade and birthday party. Somehow North Korea, which is the size of Mississippi, manages to afford the third largest army in the world. The soldiers, men and women with their high stepping and their goose-stepping, seemed even more trained, motivated and robotic than the traffic police.

The big show went on for two hours, and it wasn't just for us. It's one of the few shows you can regularly see on television. The government, and three star generals like Ri Chan Bok, want the North Korean people to know they're ready for an American invasion, which the general insists is coming.

"Tell the American people that you met the general. If the United States invades our country and starts a war, the People's Army will fight to the death and defend ourselves, taking appropriate revenge," General Ri said.

Does the general think that the United States might attack North Korea?

"We firmly believe that the United States will carry out its policies on our country even if they have to use military means," the general said.

And if the United States does invade, the general says his country is ready to use the ultimate weapon. "What we can say to you definitely right now is that we currently have nuclear weapons."

General Ri wouldn't show us any of his missiles and we didn't get a chance to see the underground arsenals we had read about. He was happy to show us his troops at the border with South Korea. They stand there rain or shine and they've been strutting their stuff for more than 50 years.

That's because the Korean War ended in 1953 with a cease-fire, not a peace treaty. Some 700,000 North Korean soldiers are said to be still clustered near the border. There are 30,000 American forces on the other side.

The general said they've stepped up military and propaganda exercises recently. He said it's because of what he calls the "neo-conservatives in the Bush Administration."

"These are people who want to dominate the world, just like the Nazis of Germany. After striking Iraq, they want North Korea," General Ri said.

The State Department declined to talk to 60 Minutes about North Korea. In negotiations involving six countries, the Bush administration says North Korea must give up its nuclear weapons.

The chief North Korean negotiator, Kim Gye-Gwan, indicated to us in Pyonyang that a deal is possible.

"We have the opportunity to secure a system for stopping the proliferation of weapons of mass destruction. I think this kind of opportunity will not come again," Kim said, through a translator.

Maybe not, but negotiations have bogged down in recent weeks. And Kim is not optimistic.

"Under current conditions, where there is no trust, how can we give up our weapons first?" Kim asked.

In the North Korean view, disarming unilaterally would amount to surrender, and they say surrender has never been part of the vocabulary. It's a unique vocabulary, one invented by a man, known - both simply and grandiosely - as the Great Leader, Kim Il Sung.

In Pyongyang, a colossal 70-foot statue of Kim Il Sung towers in front of the Korean Revolutionary Museum.

Kim Il Sung is the father of the present leader of North Korea and the statue symbolizes how reverence for him, his influence and his power permeates the whole society 11 years after his death. He is still referred to as the generalissimo, the Great Leader, the Father Leader and often just the Father.

In the capital city's main square, we could find just one picture of Karl Marx, and only one of Lenin. But there are pictures of the Great Leader all over the city.

He led the fight against the Americans and, before them, the Japanese. He became a cult figure and was treated like a God after his death.

When Kim Il Sung died, his son, Kim Jong Il, took control. He?s not as popular as his father, but we noted the crowd?s adulation when he showed up to review the troops.

Whether because of fear or true devotion, North Koreans can't seem to get enough of him. He struck us as shorter and a little paunchier than his father. Despite his policies toward America, we learned he's said to love western food and American culture, especially movies and the Internet - things he denies his own people.

"There is no leader in the world like our Great Leader, who tries his best to take care of his people," Kim said.

And he always uses the personal touch. When we visited the Maternity Hospital, for example, what we kept hearing was that Kim Jong Il, not the government, built the facility. Red seals placed on incubators meant they were personal gifts from the Great Leader himself. Our guides never used the word God to describe him, but at the Revolutionary Museum, they told us that Kim Jong Il is very close to being the source of life itself.

And if the Great Leader is the sunshine, the Americans are the dark clouds on the horizon. You get that message every time you stroll down to the riverbank in Pyongyang, where the U.S.S. Pueblo, a U.S. spy ship captured in 1968, is moored.

The crew of the Pueblo was locked up, beaten and tortured for almost a year. For an American, it's hard to accept that the Pueblo has now been turned into a tourist attraction. We were told that, for a for a fee, the soldier who helped capture the ship will take you aboard and show you the quarters of Captain Bucher as part of the propaganda tour. The tour cost $78 cash, no credit cards. They don't exist.

There were no tours available at any price to areas where mass starvation has been reported. We were allowed to go into the countryside, but not to the jails that have been called gulags for political prisoners. One official did admit, reluctantly, that there have been food shortages in the past, though, from what we saw, the rice harvest this year appeared to be good. We also saw evidence that the food distribution system is rather antiquated.

Spend a week here, as we did, and you feel you're in a kind of time warp. A place a bit like where China was about 30 years ago. The government controls many aspects of life here: where you live, where you work, where you get medical treatment, where you go to school. Our required official government escort - we could go no place without him - was proper and polite but forceful, following orders. With a smile, he called himself our controller.

We saw that government control everywhere. We were constantly watched. But so are North Koreans, and the control starts early. We saw it at the Children's Palace, a beehive of after-school activity.

The Great Leader says the children are the future. And the Great Leader is always watching. He insists on commitment and discipline from his students. The most disciplined are rewarded with lead roles in the student production. They play sailors and soldiers, the future defenders of the homeland. They are talented, and they seem very committed.

There were plenty of real soldiers, enough to fill an American-size arena and then some, at the enormous North Korean stadium in Pyongyang.

At least 150,000 people showed up for another birthday celebration. But it was the children - the methodically, robotically trained children - who stole the show. What looked like a large TV screen across from us in the stadium, with constantly changing images of North Korea, were actually the effects created by thousands of school kids, playing flash cards on a giant scale, switching their cards on cue after cue to create one scene after another.

But where does the Great Leader want to take his country? To the future or the past? To peace or to war?

On our last night in Pyongyang, at a big party in the square, we saw fireworks and folk dancing - signs, we thought, of festivity and peace. But then we saw a tidal wave of respect for the late Great Leader, a man who has been dead for more than a decade.

And then we heard the chants. Far from peaceful, to an outsider, they seemed eerie and ominous, like the words of General Ri. "As long as the current hostile policies of the United States continue, war is inevitable."
By Tom Anderson

Back to the Wild

How Daniel Ortega tightened his grip on power in Nicaragua
Thanks for reading CBS NEWS.
Create your free account or log in
for more features.
View CBS News In
CBS News App Open
Chrome Safari Continue
Be the first to know
Get browser notifications for breaking news, live events, and exclusive reporting.