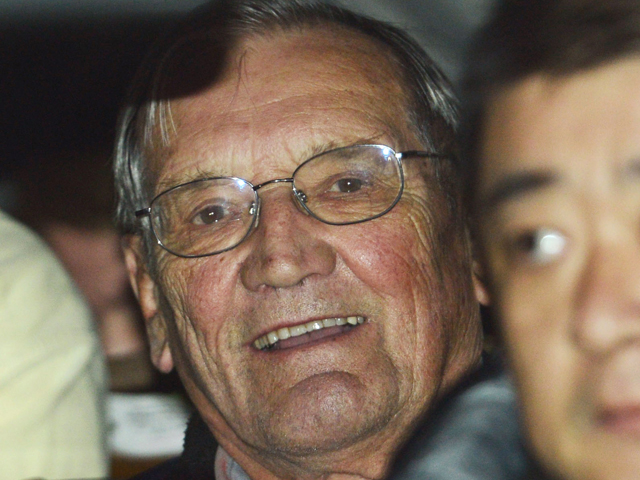 North Korea made the decision because the 85-year-old Newman, who was detained since late October, apologized for his alleged crimes during the Korean War and because of his age and medical condition, according to the North's official Korean Central News Agency.

"I am very glad to be on my way home," a smiling Newman told reporters after arriving at the airport in Beijing from Pyongyang. "And I appreciate the tolerance the (North Korean) government has given me to be on my way."

"I feel good," Newman said, adding with a laugh that the first thing he planned to do was "go home and see my wife."

U.S. Vice President Joe Biden, who is traveling in Seoul, welcomed the release and said he talked by phone with Newman in Beijing, offering him a ride home on Air Force Two. Biden said Newman declined because of a direct flight to his home state of California later Saturday.

Last month, Newman read from an awkwardly worded alleged confession that apologized for, among other things, killing North Koreans during the war. They were his first words since being taken off a plane Oct. 26 by North Korean authorities while preparing to leave the country after a 10-day tour. Analysts questioned whether the statement was coerced, and former South Korean guerrillas who had worked with Newman and fought behind enemy lines during the war disputed some of the details.

Newman's detention highlights the extreme sensitivity with which Pyongyang views the 1950-53 war, which ended without a formal peace treaty, leaving the Korean Peninsula sill technically in a state of war. The conflict is a regular focus of North Korean propaganda and media, which accuse Pyongyang's wartime enemies Washington and Seoul of carrying on the fighting by continuing to push for the North's overthrow.

"In the United States, we revealingly refer to the Korean War as the 'forgotten war.' Most Americans do not realize that memory of the war's violence is at the foundation of North Korean national identity," said Christine Hong, an Asia specialist at the University of California at Santa Cruz who has twice visited North Korea.

Tension remains on the Korean Peninsula, though Pyongyang's angry rhetoric against the U.S. and South Korea has toned down compared with its torrent of springtime threats to launch nuclear strikes and restart nuclear bomb fuel production.

State Department spokeswoman Marie Harf urged Pyongyang to pardon "as a humanitarian gesture" another American, Kenneth Bae, who has been held in the North for more than a year.

Members of the former South Korean guerrilla group said in an interview last week with The Associated Press that Newman was their adviser. Some have expressed surprise that Newman would take the risk of visiting North Korea given his association with their group, which is still remembered with keen hatred in the North. Others, however, were amazed Pyongyang still considered Newman a threat.

"Why did North Korea make such a big fuss?" Park Chan-wu, a former guerrilla who worked with Newman during the war, said Saturday. "It's been 60 years since he worked as our adviser."

The televised statement read last month by Newman said he was attempting to meet surviving guerrilla fighters he had training during the conflict and reconnect them with their wartime colleagues living in South Korea, and that he had criticized the North during his recent trip.

Newman's political value had "expired" for North Korea, said Chang Yong Seok, a senior researcher at Seoul National University's Institute for Peace and Unification Studies. Newman's written apology and the TV broadcast were enough for Pyongyang to show outsiders that it has maintained its dignity - something the proud country views as paramount, said Chang.

Chang said that detaining Newman also hurt impoverished Pyongyang's efforts to encourage tourism. "Keeping a tourist who entered the country after state approval doesn't look good for a country that is trying to boost its tourism industry," Chang said.

There was relief in Newman's home state of California.

"He's a genuine and generous man, and we're all so relieved that he's coming home," said Dan Haifley, executive director of O'Neill Sea Odyssey, an ocean exploration program in Santa Cruz that the Newmans have supported.

Jeffrey Newman has previously said that his father, an avid traveler and retired finance executive from California, had always wanted to return to the country where he fought during the Korean War.

Before Newman, North Korea detained at least six Americans since 2009. Five of them have been either released or deported after prominent Americans like former Presidents Bill Clinton and Jimmy Carter travelled to Pyongyang.

"The release is vintage North Korea," Ralph Cossa, president of the Pacific Forum CSIS think tank in Hawaii, said of Newman. "They always try to capture the attention away from something that might make (South Korea) look good and get the spotlight on them instead. Normally they do this by doing something negative. At least in this instance, it was a positive gesture."