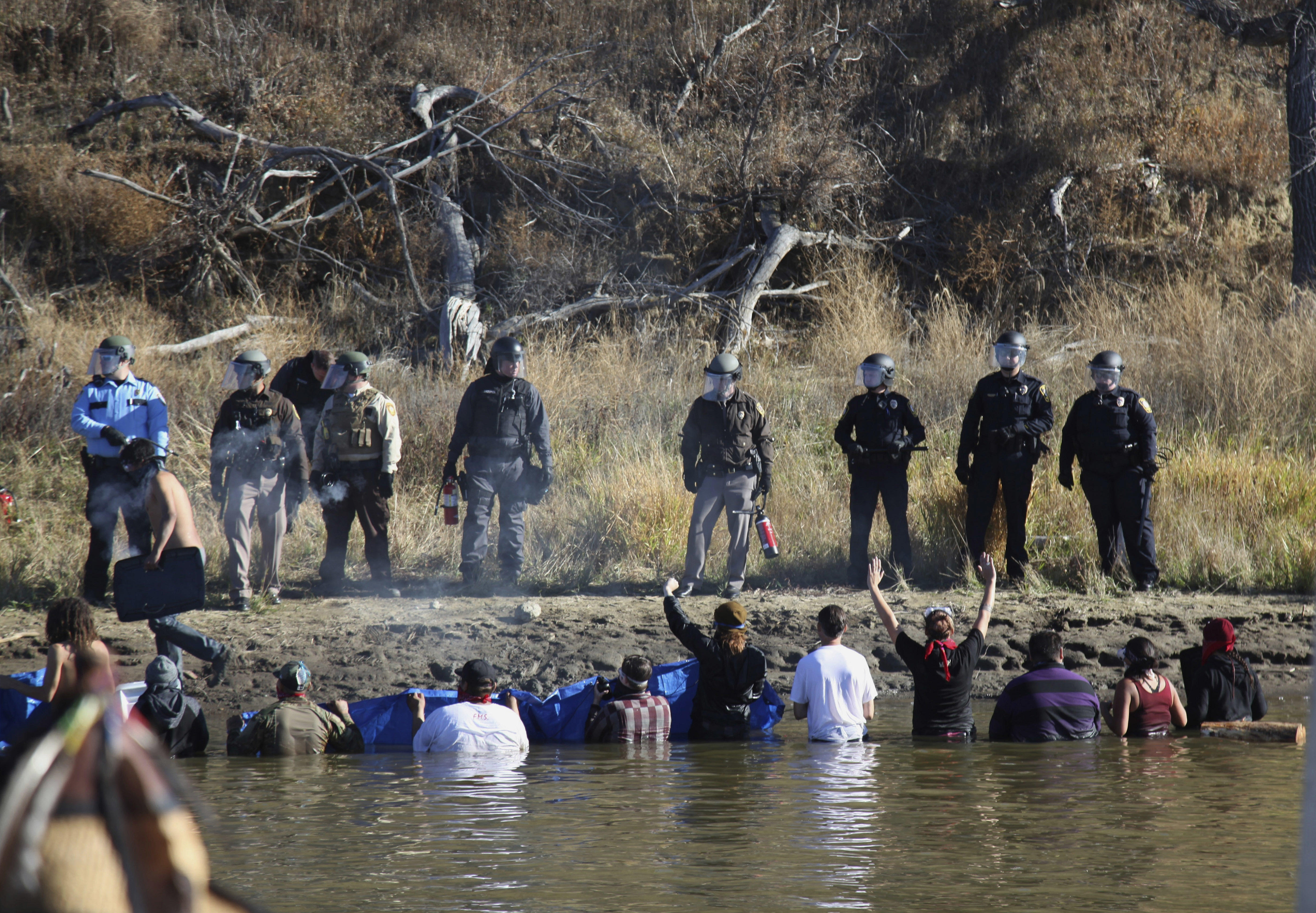 CANNON BALL, N.D. -- Officers in riot gear clashed again Wednesday with protesters near the Dakota Access pipeline, hitting dozens with pepper spray as they waded through waist-deep water in an attempt to reach property owned by the pipeline’s developer.

Officials say protesters involved in building the bridge violated numerous federal and state laws including the Clean Water Act and the Safe River and Harbors Act.

Law enforcement ordered protesters get off of the bridge said if they crossed the bridge, they would be arrested for trespassing. Morton County officials say this order was repeated several times.

Law enforcement with boats were able to pull the make-shift bridge apart, but say protesters continued to ignore officer’s commands and crossed the river by swimming, using boats, canoes and kayaks.

The standoff with officers concluded shortly before 2:00 p.m. when protesters retreated and returned to the main camp area.

The confrontation came hours after North Dakota regulators criticized the pipeline company for not immediately reporting the discovery of American Indian artifacts and a day after President Obama raised the possibility of future reroutes to alleviate tribal concerns.

Public Service Commission Chairwoman Julie Fedorchak said she was “extremely disappointed” that Texas-based Energy Transfer Partners waited 10 days before reporting last month’s discovery of stone cairns and other artifacts. The panel could decide to levy fines of up to $200,000, Fedorchak said, though she said such a high amount would be unlikely.

After an inspection, company consultants decided to divert the construction by about 50 feet, even though they determined there was a “low likelihood” any additional artifacts were buried nearby. The State Historic Preservation Office did concur with the company’s plan on how to proceed after the artifacts were found.

Although that change was relatively minor, Obama said it was possible the Army Corps of Engineers could eventually examine much larger ones that would reroute the pipeline in southern North Dakota to alleviate tribal concerns. He made the remarks during an interview Tuesday with the online news outlet NowThis.

On Wednesday afternoon, protesters tried to build a wooden pedestrian bridge across a creek to enter the property, then attempted to swim or boat across when officers dismantled the bridge, Morton County Sheriff’s spokeswoman Donnell Hushka said. Two arrests were reported.

Volunteer medics treated some of the protesters for hypothermia during the confrontation near the mouth of the Cannonball River.

About 140 people were arrested on the property last week in a law enforcement operation that cleared the encampment.

The potential for damage to American Indian sites and artifacts has been a flashpoint in a monthslong protest over the pipeline, which is intended to carry crude from western North Dakota almost 1,200 miles to a shipping point in Patoka, Illinois. The Standing Rock Sioux, whose reservation lies near the pipeline route, have led a protest over that issue and the pipeline’s potential hazard to drinking water.

Tribal officials said in September they had identified cultural artifacts on private land along the route. After that finding, North Dakota’s chief archaeologist, Paul Picha, inspected the area and said no sign of artifacts or human remains had been found.

Picha said he was notified in a timely manner of the most recent discovery in a new area but didn’t report it to the commission because he thought the pipeline company would. Both Picha and Fedorchak said the site itself was properly handled, with Energy Transfer Partners moving the pipeline route to avoid the artifacts.

“We reviewed the information, wrote a letter of correspondence ... saying we agreed with the avoidance plan,” Picha said.

He also noted that the rerouting isn’t unusual. During development of the project, “there were multiple reroutes of the pipeline corridor for various reasons - cultural, environmental, landowner concerns - 140, 150 reroutes,” he said.

Company spokeswoman Vicki Granado didn’t immediately respond to a request for comment from The Associated Press about the potential for fines over the lag in reporting about the artifacts. The company would have an opportunity for a hearing to dispute any allegations. A company attorney said in an Oct. 27 letter to the PSC that the company didn’t intentionally delay notifying the agency.

Although there’s no set time frame for reporting such a discovery, PSC Commissioner Brian Kalk said that typically “the intent is immediately.”

Fedorchak said the company could potentially be fined either for the reporting delay or for moving on with construction without getting PSC clearance. Both will be investigated, she said.

The Standing Rock Sioux tribe has not weighed in on the find. Tribal Chairman Dave Archambault and tribal Historic Preservation Officer Jon Eagle Sr. did not immediately respond to requests for comment.

The 1,172-mile pipeline is largely complete outside of North Dakota. The federal government in September ordered a temporary halt to construction on Corps land around and underneath Lake Oahe, a Missouri River reservoir in the Dakotas. The Corps is reviewing its permitting of the project but has given no timetable for a decision.