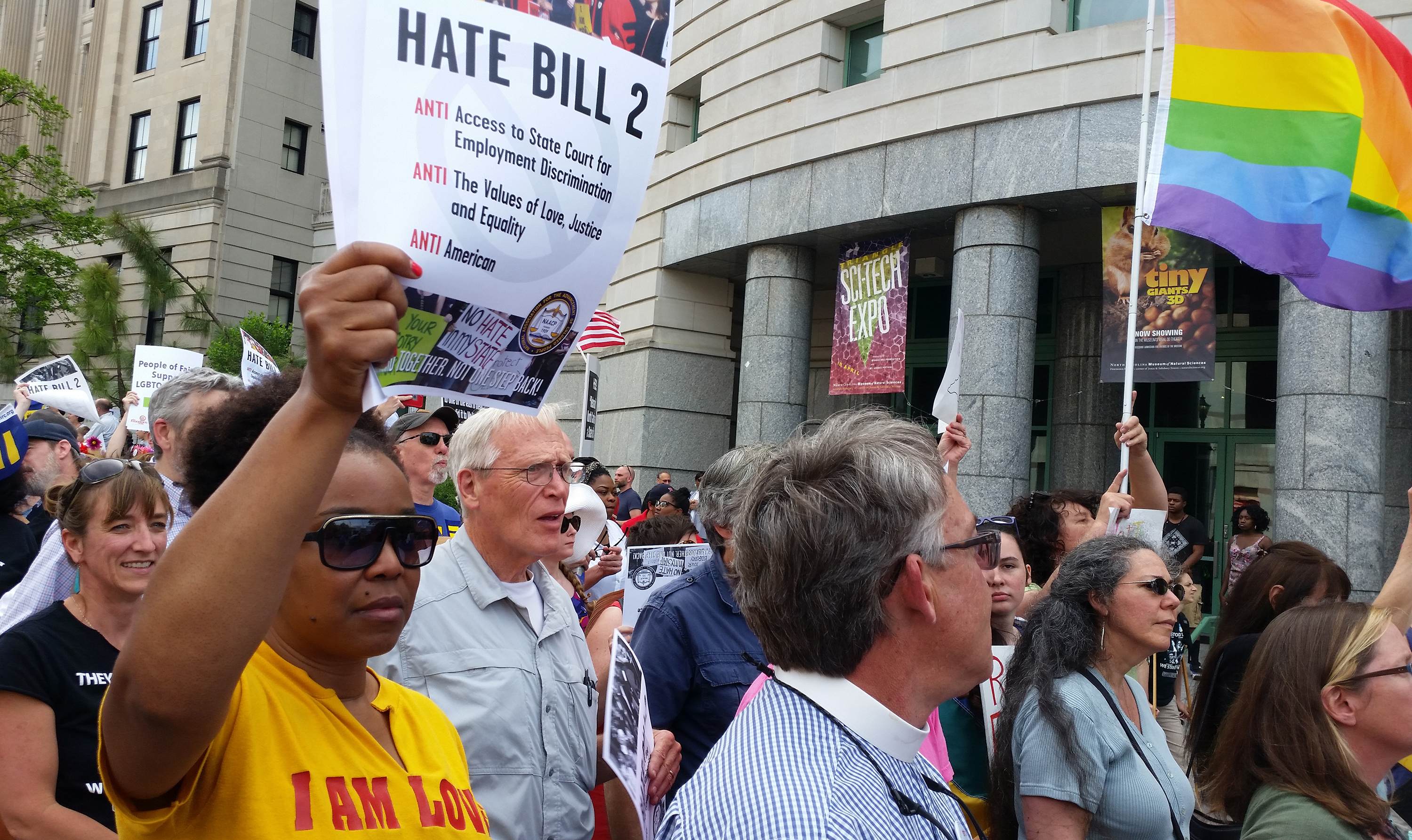 RALEIGH, N.C. -- A North Carolina law limiting protections for LGBT people, which stoked a national debate over transgender rights when it was approved in March, was left largely intact Friday by North Carolina lawmakers who chose only to make a minor revision to the wide-ranging measure.

The North Carolina General Assembly voted to restore workers' right to use state law to sue over employment discrimination. But the change won't enhance workplace protections on the basis of sexual orientation or gender identity, nor does it affect other provisions decried by gay rights advocates, business leaders and other high-profile critics.

The revision heads to the desk of Gov. Pat McCrory, who pushed for the change. Legislative leaders have said they plan no other changes to the law that was enacted earlier this year. McCrory didn't immediately respond to messages seeking comment Friday night.

There was no appetite among Republican lawmakers to undo a requirement that transgender people must use restrooms corresponding to the sex on their birth certificates in many public buildings. That provision of the law lies at the heart of two legal challenges and has raised some of the biggest objections from equality advocates.

Democrats complained during floor debate that the most onerous provisions of the law weren't addressed.

"This was the lowest of the low hanging fruit. It does nothing to fix the core discrimination in that law," said Rep. Grier Martin, D-Wake.

Rep. Chris Sgro of Guilford County, who serves as executive director of Equality North Carolina, said: "While this is important, it doesn't' go nearly far enough."

"It will be an incredible disappointment, not just to me, not just to the gay and transgender community, but to all of us as North Carolinian," Sgro, the only openly gay member of the General Assembly, told CBS affiliate WNCN earlier Friday.

Senate leader Phil Berger, R-Rockingham, said the change on workplace lawsuits answered requests from McCrory and business leaders. But he reiterated his belief that the bathroom access provisions remaining in the law protect public safety.

"Protecting the safety and privacy of North Carolina families by keeping grown men out of bathrooms, shower facilities and changing rooms with women and young girls has always been our primary objective," Berger said in a statement.

Pressure to change the law has come from business leaders, entertainers and the NBA, which has been weighing whether to keep the 2017 All-Star Game in Charlotte. Commissioner Adam Silver said this month that progress was needed toward changing the law this summer to ensure the event stays in the city.

The league issued a joint statement late Thursday with the Charlotte Hornets saying they were doubtful that proposed changes would go far enough and that they "do not endorse the version of the bill that we understand is currently before the legislature."

"I am certain that if this legislature is not able to get HB2 repealed and we start to have things happen like losing the All-Star game, and losing more businesses, there will be deep consequences for members of this legislature and the governor come November," Sgro, who represents Guilford County and serves as executive director of Equality North Carolina, told WNCN.

Asked about the league's stance, House Speaker Tim Moore said: "We've had conversations with the NBA and had discussions. But you know the process, I don't think lends itself to pass legislation -- perhaps what they might want to see."

"I hope that they, and frankly any other business that had concerns about the discrimination arguments, see this issue with the access to state courts as addressing that," Moore said.

The legislature approved giving McCrory's office $500,000 to defend the law in court, transferring the money from a disaster relief fund. The move drew jibes from gay rights advocates.

"Our coastal communities especially will not appreciate that," Sgro said.

Moore later said the state has plenty set aside to respond to disasters and blamed North Carolina Attorney General Roy Cooper, a Democrat, for refusing to defend the law in court.

The law also throws into question the state's viability as a host for NCAA sporting events. Weeks after North Carolina's law was enacted, the association passed a measure requiring host sites to demonstrate that they are "free of discrimination."

Entertainers including Bruce Springsteen have canceled concerts to protest the law, while scores of business leaders signed a letter seeking its repeal. Rallies to support the law, meanwhile, drew thousands of conservatives to Raleigh.

Advocacy groups led by the Human Rights Campaign signed a letter Friday saying that nothing short of a full repeal would fix the law.

"Any attempt to pass additional discriminatory legislation will be seen for what it is -- a shameful political ploy designed to give some lawmakers cover as the state continues to discriminate against its LGBTQ citizens," said JoDee Winterhof, a senior official overseeing political affairs for the HRC.