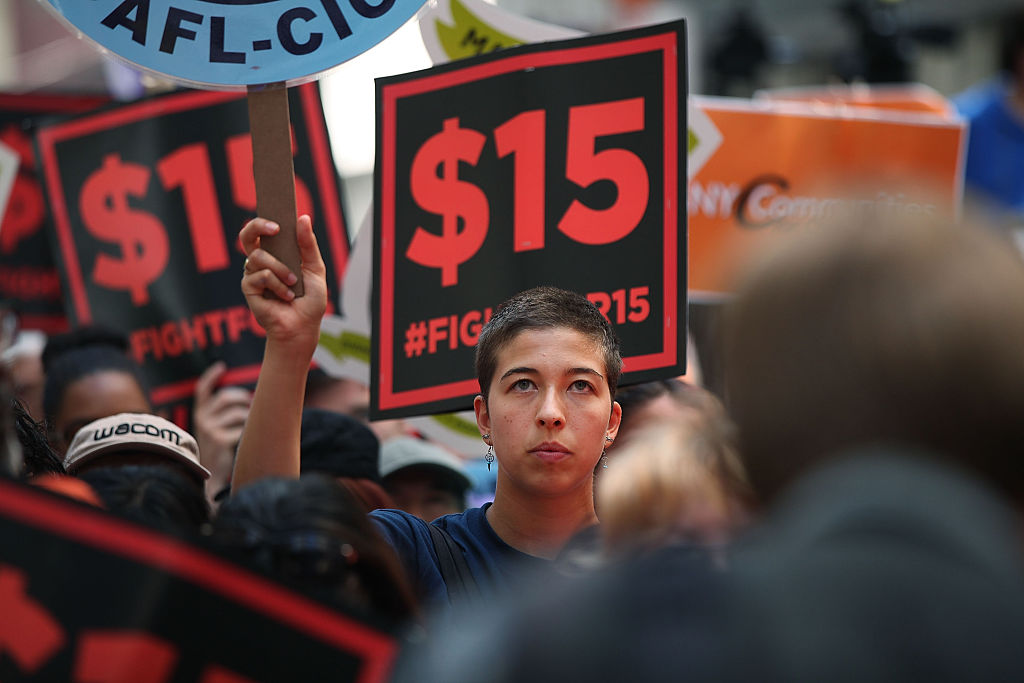 At least four other states have steps already in place to increase pay for state workers to $15. But North Carolina sped to the front of the line, with salary bumps for many arriving in their late-July paychecks.

The lawmakers' motives appear to be both economic and political. One top budget writer at the legislature says it helps state agencies retain veteran workers doing often-thankless jobs. But it also wins favor with North Carolina's chief state employees' union in an election year for Republicans trying to hold onto their control of the General Assembly.

Until now, the North Carolina state employee salary floor was about $24,300, or about $11.70 per hour. That means some received as much as a 28 percent raise to bring them up to the new minimum equivalent of $31,200 per year.

For Gloria Dockery, who cleans buildings at the University of North Carolina at Chapel Hill for less than $28,000 a year, an increase will make it easier to cover her house payment and even treat herself occasionally.

GOP leaders who control the General Assembly have shown no interest in raising the minimum wage for all employees above the $7.25 federal level. So why are they doing so for state workers?

Ratcheting up the minimum wage benefited around 10 percent of the state government workforce but only cost $15 million, legislators said. It also puts Republican lawmakers in the good graces of the 50,000-member State Employees Association of North Carolina.

"You're seeing a confluence of economics and politics, and if it ends up this small amount of money helped the Republicans retain their veto-proof majorities in the legislature, then to them it was well worth it," said Eric Heberlig, a political science professor at the University of North Carolina at Charlotte.

Republicans embraced the "living wage" phrase despite sharing little with the "Fight for 15" movement that started in 2012. Since then more than 20 states and 40 cities have raised their minimum wages for millions of state and nongovernment workers, according to the National Employment Law Project. San Francisco became the first major city last month to reach $15.

"It's a popular issue ... for the electorate across the political spectrum," said Tsedeye Gebreselassie, a law project attorney.

New York, California and Massachusetts are increasing the pay of state government workers in phases as their minimum wage for nongovernment employees simultaneously rises. The government raises in the three states and Pennsylvania are expected to reach $15 per hour starting in mid-2021 to 2024. State workers in New York City will reach the $15 threshold at the end of this year.

The liberal-leaning Economic Policy Institute estimates 1.7 million North Carolina workers would benefit if the statewide minimum wage for all workers reached $15 by 2024.

"The big question that legislators have to answer is why they think some people in North Carolina deserve a living wage and others do not," said Allan Freyer with the North Carolina Justice Center, which lobbies for the poor. Still, he called the uptick for state workers a "great first step."

Brown said the GOP philosophy is that employers should make their own pay decisions.

Democratic Gov. Roy Cooper supports a minimum wage increase but hasn't talked much about how high it should go. Cooper vetoed the state budget containing the $15 wage, in part because Republicans wouldn't suspend planned tax cuts for the highest wage earners and for corporations.

Association executive director Robert Broome pitched the idea to Republicans as a way to help workers living near the poverty level — currently $25,100 for a family of four — share the benefits of state GOP tax-and-spending policies that have resulted in revenue surpluses and corporation windfalls.

Broome said the association has a proud history backing those "who champion the issues and policies that are important to state employees and retirees, regardless of their political affiliation."

For Sekia Royall, 48, a food worker at Cherry state mental hospital in Goldsboro, her projected $4,000 annual raise will help get a little more spending money to a daughter in college and support Royall's side catering business.

"It's a little extra to help through the month," Royall said.