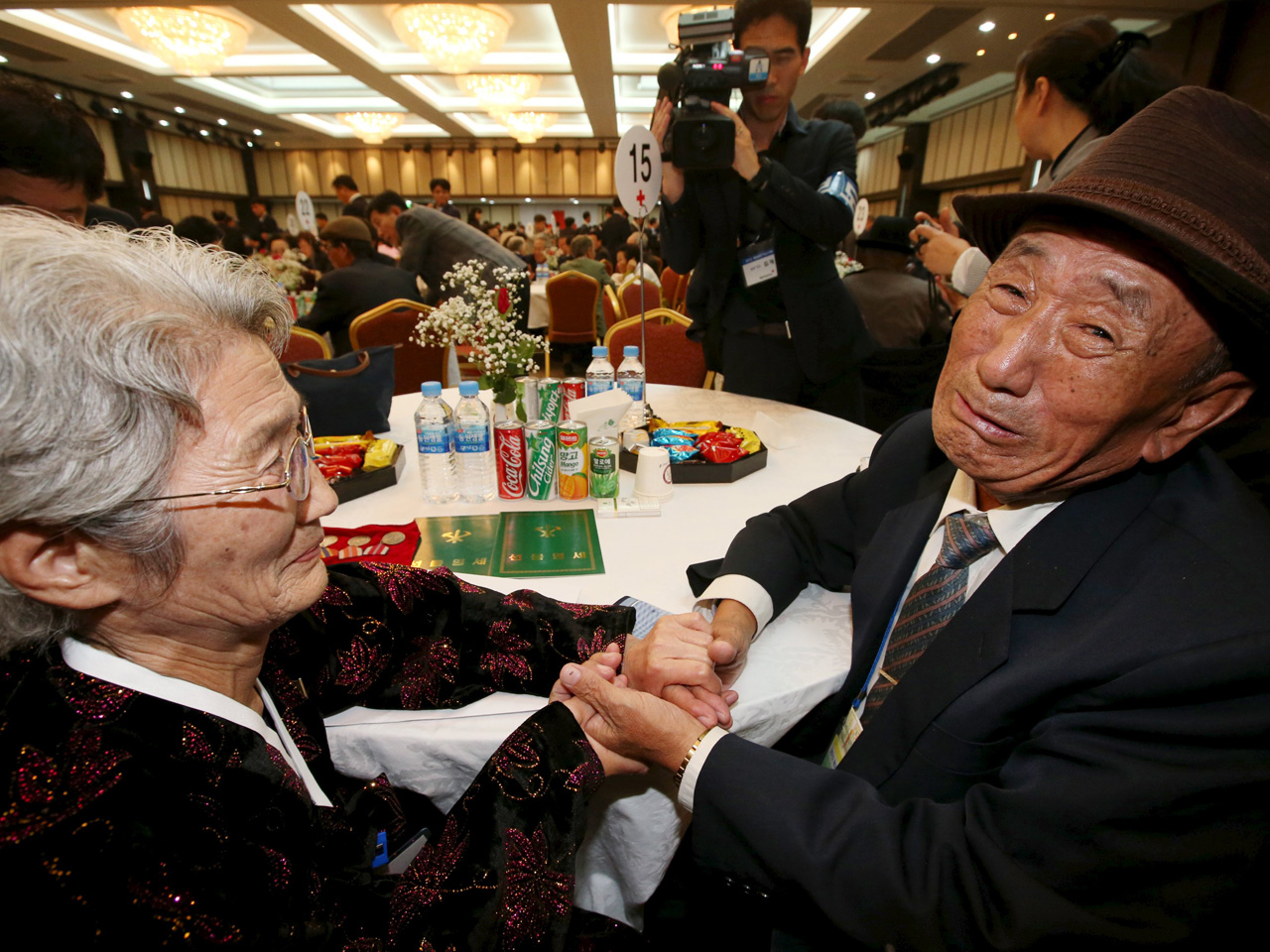 SEOUL, South Korea -- Hundreds of mostly elderly Koreans - some in wheelchairs or leaning on walking sticks, most overcome by tears, laughter and shock - began three days of reunions Tuesday with loved ones many have had no contact with since war divided the North and South more than 60 years ago.

About 390 South Koreans traveled to the North's scenic Diamond Mountain resort. Dressed in business suits, formal dresses and traditional hanbok, they brought long johns, medicine, parkas, calligraphy works and cash to give as presents to about 140 family members in the North.

The reunions, as always, are a mixture of high emotion and media frenzy. Journalists crowded around South Korean Lee Soon-kyu, 85, as she met with her North Korean husband, Oh In Se, 83. As camera flashes bathed them in glaring white light, she cocked her head and looked with amazement at Oh, who wore a dapper suit and hat and craned backward to take in Lee.

The images are broadcast throughout South Korea, where the reunions are big news. North Korea's government, which analysts believe worries that scenes of affluent South Koreans might influence its grip on power, published a report about the reunions through its state media that said the North Korean participants explained to their South Korean relatives how their lives have been "happy" and "worthwhile" under the North's socialist system.

The deep emotions stem partly from the elderly reuniting after decades spent apart, partly from the knowledge that this will be their only chance. None of the past participants has had a second reunion.

At a table covered with a white cloth, bottled water and soft drinks and a vase of flowers, South Korean Kim Bock-rack wept as he clasped the hands of his sister as a cameraman silently filmed.

The reunions, the first since February of last year, are a poignant yet bitter reminder that the Korean Peninsula is still in a technical state of war because the 1950-53 fighting ended with an armistice, not a peace treaty. The Koreas bar ordinary citizens from visiting relatives living on the other side of the border and even from exchanging letters, phone calls and emails without permission.

Rim Ri Kyu, the widow of famous North Korean mathematician Jo Ju Kyong, looked calm as she met with her South Korean brother and other relatives from the South.

She introduced her son to the visitors, and the relatives burst into laughter after Jo Ju-chan, the South Korean brother of Rim's late husband, joked that her son resembled him.

South Korean Lee Ok-yeon, 88, will reunite with her husband for the first time in 65 years. She lives in the same house her husband, also now 88, built and that the couple shared as newlyweds.

Her grandson Chae Jeong-jae told South Korean reporters that Lee had "asked whether it was a dream or a reality" when she was told she would attend the reunions.

In a second round of reunions, from Saturday until Monday, about 250 South Koreans are to visit the mountain resort to reunite with about 190 North Korean relatives, the South's Unification Ministry said.

The Korean War separated millions of Koreans from family members for a multitude of reasons. What they have in common is shock that their homeland remains so bitterly split after so much time.

Choi Hyeong-jin, 95, reunites this week with his youngest daughter, who was 2 when he left her and is now 64. "I am not sure if I will even be able to recognize her. I don't even remember how she looked as a baby," Choi said.

North and South agreed in August to resume family reunions during talks to end a standoff that began when land mine blasts blamed on Pyongyang maimed two South Korean soldiers. The rivals have a history of failing to follow through with cooperation agreements. These reunions may have been in danger had North Korea gone through with threats to conduct a satellite launch earlier this month. The launch would have likely canceled the reunions because Seoul and Washington see such firings as cover for banned tests of long-range missile technology.

South Korea uses a computerized lottery system to pick participants while North Korea reportedly chooses based on loyalty to its authoritarian leadership.

Most people who apply for the reunions are elderly and desperate to see their loved ones before they die. Nearly half of the 130,410 South Koreans who have applied to attend a reunion have died.

Oh Cheol-ran, a 77-year-old South Korean, said that before her parents died they always tearfully spoke of her brother who was left in the North. "I'm so happy to see him even now. I haven't been able to sleep well," said Oh, who was dressed in a traditional hanbok.

Seoul has long called for a big increase in the number of people taking part in reunions and holding them more regularly. But North Korea has only occasionally agreed to the reunions, which analysts say Pyongyang uses as a bargaining chip in negotiations with South Korea.

At the same time, the venue for the reunions may reveal something about North Korea's aspirations. The Diamond Mountain resort, largely built with South Korean money, was once a major tourist draw. It brought in nearly 2 million visitors, mostly South Koreans, and provided the government with much needed hard currency. That all ended when a North Korean soldier shot a South Korean tourist to death in 2008. Impoverished North Korea no doubt wants to restart tours.

Family reunions were part of a slew of now-stalled rapprochement projects the two Koreas agreed upon following first-ever summit talks between their leaders in 2000. About 18,800 Koreans have since participated in 19 face-to-face reunions and about 3,750 others have been reunited by video.