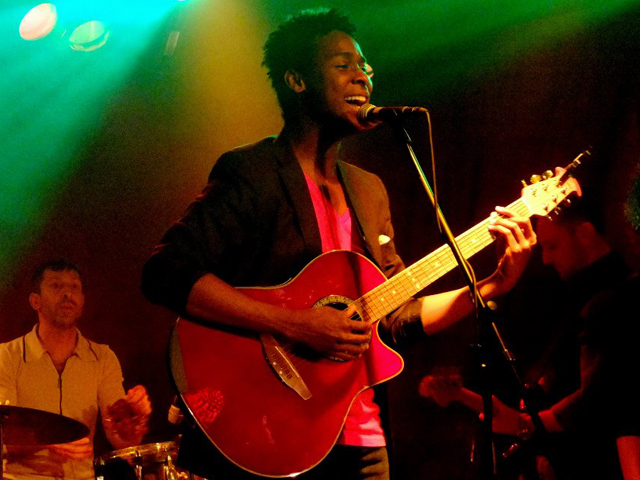 Norman Vladimir almost went to law school instead of following the one passion that had been with him his entire life.

The New York-based music artist had just graduated from the University of Virginia and was working on a research grant when he was considering taking a job at a law firm.

But then he took a step back to think about what mattered most to him.

"I had to look at the red line -- 'What is the common thread that has been part of my life experience?' And I think that is where you find your calling. You see the passion there," Vladimir told CBSNews.com prior to a recent show at Sullivan Hall in New York. "That's where I realized, 'I've been doing music this whole time. It's something that I love. It's something that's a part of me. Why don't I pursue what I love?'"

Music had been a common thread throughout Vladimir's life. While growing up in Tennessee, Vladimir joined a choral group when he was 8-years-old, traveling all over the country to perform. He cites his grandmother as one of his biggest inspirations musically.

"She was a self-trained classical pianist...And in general in life, she was always like, 'Don't limit yourself by the space that you're in. Look globally. And always think that the sky is the limit.' She was very impactful musically," Vladimir, 31, said.

He continued to pursue the passion in college, joining the Glee Club and a university a cappella group.

After college, Vladimir moved to Nashville where he started writing his own music and tackling open-mic nights. He soon realized that the country-heavy music town may not be the best fit for his "pop-soul" sound. Realizing his music may flourish better elsewhere, the guitarist/pianist headed to New York City to try to make a real go at it.

Vladimir, who was recently named by Ebony magazine as an artist to watch, went on to perform solo gigs and team up with other artists, eventually releasing his first EP, "Sounds."

"It was my baby," Vladimir said. "It was the first time I have had the will to put together a project. I liked how it came together. I was really lo-fi. The reason I called it 'Sounds' was because a lot of the elements of the album have classical and choral elements to it -- in terms of harmony. It made me think back to when I was in the children's choral group."

Since then, Vladimir has toured Europe and hopes to go book another overseas tour soon.

Vladimir says his next project, "No More Obligations," will be more produced. He has a batch of songs for the set and is eager to get it out to fans this year.

"It's depressingly hopeful," Vladimir said of his music. "I tend to talk a lot about the human condition with regards to relationships, friendships and just experiences we have as humans walking down the street...I also like to say that the sad things that happens in our lives -- the way we approach them really tells a lot about the people we are and where we're going. And how we impact other people...The lyrics can sound kind of sad, but the music sounds happy."