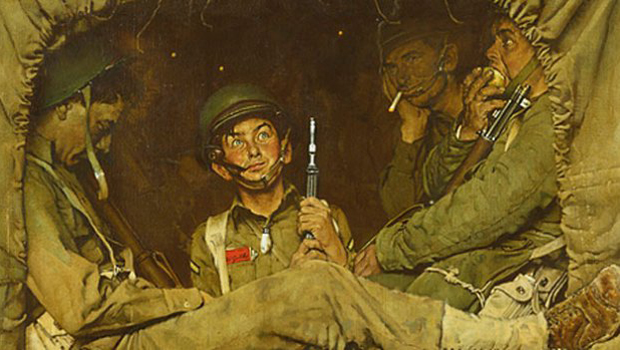 GARDNER, Massachusetts - A painting that hung in the Gardner High School principal's office in Gardner, Massachusetts, for nearly 50 years is headed to the auction block and it is expected to sell for close to $2 million, CBS Boston reports.

The 1941 painting "Willie Gillis in Convoy" was a gift from Norman Rockwell to former principal Earl Williams in the 1950's. It hung in the principal's office until 2001, and had been stashed away in storage for the last 13 years.

The Rockwell original depicts a World War II soldier in the back of a truck with several comrades.

The painting was part of a series for the Saturday Evening Post, but this particular one never made the cover.

Jeremy Clowe, manager of media services at the Rockwell Museum in Stockbridge, Massachusetts, said that the staff did not know the painting existed.

"It's a beautiful picture," he said. "I was really kind of bowled over by it."

The painting will be auctioned by Sotheby's in New York on May 21.

Gardner's mayor and school officials hope the money can be used to set up a foundation to benefit schools.