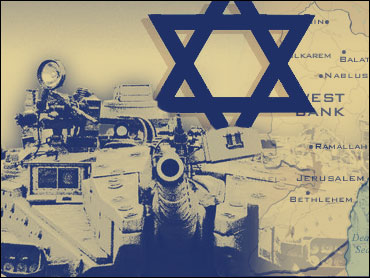 A road south of Jerusalem, through what were once the comfortable suburbs, has become one of the most dangerous in the area - snipers from the hills above, firing on the traffic below.

Checkpoints change into roadblocks without warning, leaving no alternative but to turn around and go back where you came from.

Even a year ago the Israeli suburb of Ghilo was the last place you'd need an armored car or expect to see tanks in the streets.

"We feel this personal threat all the time," said resident Michael Roubach.

"It's in everything. When I drop my kids off at school, will they be there when I come to pick them up?," asked Sharon Roubach.

Michael and Sharon Roubach do their best to make life as normal as possible for their children, but, reports CBS News Anchor Dan Rather, like so many families now they find themselves prisoners in their own home.

"Every small thing becomes a very big decision. Things you wouldn't have thought of before: going to have a cup of coffee with a friend, going to the supermarket. You think about everything. Is it worth what can happen," said Sharon.

Yussef and his wife Antonnete live in a Palestinian suburb of Jerusalem. For them the issue is fear, but also dignity and freedom of movement.

"I feel I'm under siege... in my own home. I have a sister, nephews in Ramahllah, since six months I cannot reach Ramallah... I cannot. It is forbidden," said Yussef.

So while the leaders and the men with guns and bombs have created this war, it is the people on both sides who must find a way to live with it.