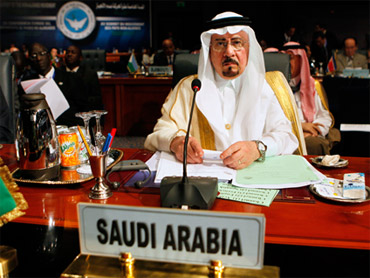 (AP Photo/Amr Nabil)
World leaders from more than a hundred countries with the Non-Aligned Movement opened their 15th summit in the Sinai resort city of Sharm el-Sheikh on Wednesday to discuss global peace and try to find a joint action to ward off the fallout of the international financial crisis on their developing economies.

Cuban President Raul Castro, whose country has been a key member of the movement — billed as the largest gathering of nations outside the U.N. General Assembly — called in his inaugural speech for a new world financial order to protect developing nations, which was "hit the hardest" by the financial crisis.

"We demand the establishment of a new international financial and economic structure that relies on the participation of all countries," Castro said. "There must be a new framework that doesn't depend solely on the economic stability and the political decision of only one country," the Cuban leader said, apparently referring to the United States.

The Cuban President later handed the movement's presidency over to Egyptian President Hosni Mubarak, whose country will head the group for the next three years.

Mubarak echoed Castro's demand, telling the gathering, convening under the theme "International Solidarity for Peace and Development," that the rehabilitation of the international financial system was a necessity.

"We call for a new international political, economic and trade order — a more just and balanced order that prevents discrimination and double standards, achieves the interests of all," said Mubarak, who also sought international solidarity to enhance world peace.

The movement now has 118 member states, with 15 observer states, representing two-thirds of the members of the United Nations and half of the world's population.

Participating countries said they did not wish to be drawn into the Cold War, but vowed, in a 1979 declaration, to support each other in their "struggle against imperialism, colonialism, neo-colonialism, racism, and all forms of foreign aggression."

The two-day summit was preceded by extensive talks over the past few days by NAM Foreign Ministers who debated world financial and economic crisis, food security, climatic changes, the situation in Somalia, Honduras and the Middle East, as well as North-South and South-South co-operation, democracy, migration, corruption, malaria, tuberculosis and HIV/AIDS.

Sideline meetings, anyhow, were supposed to overshadow the summit limelight, with nuclear-armed South Asian foes India and Pakistan to hold talks on Thursday for defusing the tension in their relations.
Manmohan Singh and Yusuf Raza Gilani met in Russia last month for the first time since the Mumbai terror attacks last year, but they made no tangible breakthrough.

India blamed Pakistan-trained militants for the attacks, which killed 166 people.

In another set of diplomatically significant meetings, the Egyptian and Iranian foreign ministers have held three rounds of talks this week.

An Iranian diplomat said the talks between Ahmed Aboul Gheit, the Egyptian foreign minister, and Manouchehr Mottaki, his Iranian counterpart, took place in "a positive and cordial atmosphere."

As the meetings took place, Egypt confirmed that two Israeli warships had crossed through the Egyptian-controlled Suez Canal — the latest signal to Iran that Israel's reach could quickly extend to its archenemy's backyard.

Israel believes Iran is developing nuclear weapons and has refused to rule out the use of force to stop Tehran's atomic program. Iran says its nuclear program is peaceful and designed only to produce electricity.