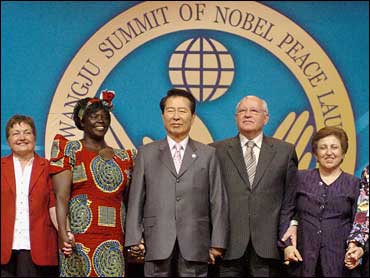 A group of 12 Nobel Peace Prize winners called on the United States to lift financial restrictions on North Korea to help end the impasse over the communist nation's nuclear weapons program.

"We urge the DPRK to completely abandon its nuclear weapons policy and accept international inspections," the laureates said Saturday in a declaration in the South Korean city of Gwangju. "We also call for the U.S. to end financial and economic sanctions on the DPRK and offer security guarantees."

"The biggest reason that the two Koreas have failed to make satisfactory progress in improving their relationship is the tense relations between North Korea and the U.S.," said former South Korean President Kim Dae-jung.

The laureates, who were holding their annual meeting in Gwangju, also urged all parties to resume the stalled six-party talks and honor a September agreement where North Korea agreed to scrap its nuclear program for aid and security guarantees.

Former Soviet leader Mikhail Gorbachev (1990) called on the United States and North Korea to normalize their relations, which he says would end the current tension.

Now that the Cold War is over, "it will take some time to resolve issues on the peninsula, and they need to be settled by South and North Korea in national terms," he added.

Kim said he will convey the laureates' message to North Korean leader Kim Jong Il when he travels to Pyongyang later this month.

"I will make efforts to ensure that North Korea makes a positive response," Kim said in a news conference.

Kim, who won the Nobel Peace Prize in 2000 for his landmark summit with North Korean leader Kim Jong Il, is set to make a four-day visit to Pyongyang on June 27.

Kim has said he plans to hold heart-to-heart talks with the North Korean leader on how to achieve unification and realize his dream of linking the peninsula to Europe via rail.

The nuclear talks have been on deadlocked since November with North Korea angered by U.S. financial restrictions against a Macau-based bank and North Korean companies for alleged complicity in currency counterfeiting and money laundering.

The nuclear talks include the two Koreas, the U.S., China, Japan and Russia.

The 148 people in the North Korean delegation were to return home later Saturday.