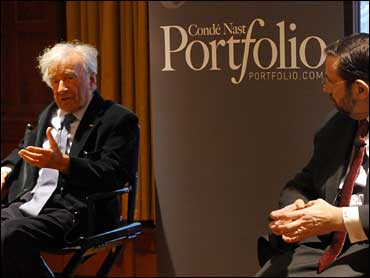 There wasn't a sales pitch.

When Elie Wiesel met Bernard Madoff over dinner about 20 years ago, the topic of money never came up. They talked about history, education and Jewish philosophy, and the then-revered money manager urged Wiesel to leave his teaching post at Boston University and join a New York college.

Madoff "made a very good impression," Wiesel recalled Thursday. "We spoke about education. ... Not the economy."

The Nobel Peace prize winner and Nazi death camp survivor joined a legion of well-known Madoff clients by investing millions of dollars from his charitable foundation - and his own money as well - with the charming financier.

At a panel discussion in Manhattan, Wiesel recounted how he lost it all in perhaps the largest Ponzi scheme in history, providing a glimpse into how Madoff wooed one of his most prominent victims.

Wiesel, 80, was alternately disdainful and bemused, calling Madoff "a crook, a thief, a scoundrel" and chuckling as he recalled taking up one of his favorite subjects with Madoff: ethics.

Asked by moderator Joanne Lipman, editor of Conde Nast's Portfolio magazine, how Madoff got the trust of "so many established and intelligent people," Wiesel admitted he bought into the Madoff mystique.

With Madoff, there "was a myth that he created around him that everything was so special, so unique, that it had to be secret," he said.

One wealthy friend who was a "very, very close friend of Madoff" encouraged him to invest. "Years ago he came to us and said, 'You work so hard, what are you doing with your money?"' he said.

At first, Wiesel and his wife only put in personal funds.

But "because we did so well, we said, come on, we have so many projects," he said. "Everybody told us in the field of finances, you can do much more ... because of Mr. Madoff, the savior."

Over the years, he and his wife received monthly statements showing Madoff had made stock trades. Investigators now believe no securities were ever bought or sold.

Wiesel said he ended up losing $15.2 million in foundation funds, plus his family's investment.

"It was a personal tragedy for me and my wife," he said. "Everything was gone."

Looking back, he suspects he was being scammed from the moment he met Madoff.

"Was he already a crook? Probably," he said.

As for a fit punishment?

"I would like him to be in a solitary cell with a screen," Wiesel said. "And on that on that screen for at least five years of his life, every day and every night, there should be pictures of his victims, one, after the other, after the other."