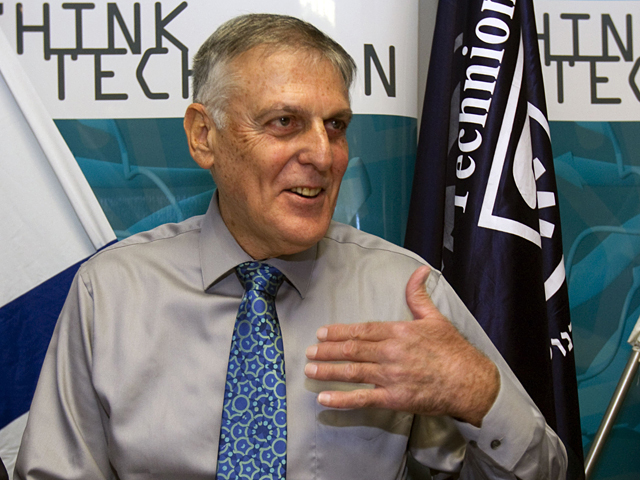 STOCKHOLM - Israeli scientist Daniel Shechtman won the 2011 Nobel Prize in chemistry on Wednesday for his discovery of quasicrystals, a mosaic-like chemical structure that researchers previously thought was impossible.

The Royal Swedish Academy of Sciences said Shechtman's discovery in 1982 fundamentally changed the way chemists look at solid matter. It initially faced strong objections from the scientific community, and even got him kicked out of his research group in the United States.

Since then, quasicrystals have been produced in laboratories and a Swedish company found them in one of the most durable kinds of steel, which is now used in products such as razor blades and thin needles made specifically for eye surgery, the citation said.

Scientists are also experimenting with using quasicrystals in coatings for frying pans, heat insulation in engines, and in light-emitting devices, or LEDs.

Quasicrystals were discovered in nature, in Russia, for the first time in 2009, according to the citation.

"It feels wonderful," Shechtman, a 70-year-old distinguished professor at Technion-Israel Institute of Technology in Haifa, Israel, told The Associated Press after receiving news of the prize.

Shechtman, who also is professor of materials science and engineering at Iowa State University in Ames, Iowa, will receive the 10 million kronor ($1.5 million) award along with the other Nobel Prize winners at a Dec. 10 ceremony in Stockholm.

Shechtman was studying a mix of aluminum and manganese in his microscope when he found a pattern — similar to Islamic mosaics — that never repeated itself and appeared contrary to the laws of nature.

"His battle eventually forced scientists to reconsider their conception of the very nature of matter," the academy said.

Nancy B. Jackson, president of the American Chemical Society called Shechtman's discovery "one of these great scientific discoveries that go against the rules." When Shechtman announced his discovery of an unusual pattern of atoms, she said, other experts hesitated.

"People didn't think that this kind of crystal existed," she said. "They thought it was against the rules of nature."

Only later did some scientists go back to some of their own inexplicable findings and realized they had seen quasicrystals but not realized what they had, Jackson said.

Staffan Normark, permanent secretary of the Royal Swedish Academy said Shechtman's discovery was one of the few Nobel Prize-winning achievements that can be dated to a single day.

Crystallographers always believed that all crystals have rotational symmetry, so that when they are rotated, they look the same. On April 8, 1982, while on a sabbatical at the U.S. National Bureau of Standards and Technology in Washington, D.C., Shechtman first observed crystals with 10 points — pentagonal symmetry, which most scientists said was impossible.

"I told everyone who was ready to listen that I had material with pentagonal symmetry. People just laughed at me," Shechtman said in a description of his work released by his university.

For months he tried to persuade his colleagues of his find, but they refused to accept it. Finally he was asked to leave his research group, and moved to another one within the institute.

Shechtman returned to Israel, where he found one colleague prepared to work with him on an article describing the phenomenon. The article was at first rejected, but finally published in November 1984 — to uproar in the scientific world. Double Nobel winner Linus Pauling was among those who never accepted the findings.

"He would stand on those platforms and declare, `Danny Shechtman is talking nonsense. There is no such thing as quasicrystals, only quasi-scientists."' Shechtman said.

In 1987, friends of Shechtman in France and Japan succeeded in growing crystals large enough for x-rays to repeat and verify what he had discovered with the electron microscope.

"It borders on art," academy member Sara Snogerup Linse said of the quasicrystal patterns. "Humans have created similar patterns in macroscopic scale with the help of ceramic tiles, quilts, etc. But what was new was that it was found also in the world of molecules and atoms."

The academy said quasicrystals are being studied for use in new materials that covert heat to electricity.

"There is research going on in the field of thermal-electric applications, where waste heat can be converted to electrical currents or energy," said Cesar Pay Gomez, structural chemistry expert at Uppsala University in Sweden and an adviser to the prize committee.

Immune system researchers Bruce Beutler of the U.S. and Frenchman Jules Hoffmann shared the medicine prize Monday with Canadian-born Ralph Steinman, who died three days before the announcement. U.S.-born scientists Saul Perlmutter, Brian Schmidt and Adam Riess won the physics prize on Tuesday for discovering that the universe is expanding at an accelerating pace.

The Nobel Prizes are handed out every year on Dec. 10, the anniversary of award founder Alfred Nobel's death in 1896.