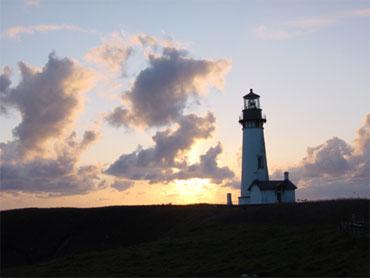 So will he need to bring binoculars for the picturesque Yaquina Head Lighthouse of Newport, Oregon?

If viewers choose the Yaquina Head Lighthouse as his departure point, he will have a great view of what he's in store for from the top.

Price will mostly be surving on his wit, his wits and the kindness of strangers along the way as he hits the road with only a one-way ticket, $50, and some technical devices, including a Windows Phone provided by Microsoft, to record his travels back home to New York.

Special Section: Check out Dave's Journey
Catch Up with Dave on Twitter
In Focus: Other Cities Where Dave Could Start

Besides stunning views and beautiful sunsets, the Yaquina Head Lighthouse has historical signifigance.

The 93 foot tower, Oregon's tallest, is located on a narrow point of land jutting due west into the Pacific Ocean north of Newport, at Yaquina Head Outstanding Natural Area. Winds and rain have buffeted this lighthouse since its beginning in 1872. It took approximately one year, and over 370,000 bricks to construct Oregon's tallest lighthouse, according to the Friends of Yaquina Lighthouses (which also includes Yaquina Bay Lighthouse.)

The light has been active since Head Keeper Fayette Crosby walked up the 114 steps, to light the wicks on the evening of August 20, 1873. At that time the oil burning fixed white light was displayed from sunset to sunrise. Today, the fully automated first order Fresnel lens runs on commercial power and flashes its unique pattern of 2 seconds on, 2 seconds off, 2 seconds on, 14 seconds off, 24 hours a day. The oil burning wicks have been replaced with a 1000 watt globe.

Located on the central Oregon coastline, Newport is also the Dungeness crab capital of the world. It's adundance of marine life can be seen up close at the Oregon Coast Aquarium. Newport also thrives in arts and culture and features many exhibits from local artists.

Keep checking our special "No Way Home" page to keep up on Dave's travels. And of course, you can follow him on Twitter (@earlyshowdave) and on "The Early Show" Facebook page.