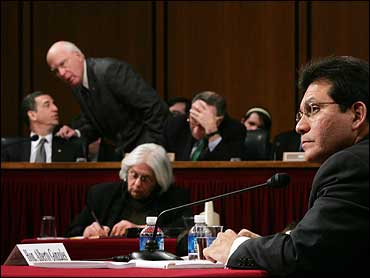 
Thirteen months ago, when then-White House counsel Alberto Gonzales came before the Senate Judiciary Committee for his confirmation hearing for the post of United States Attorney General, he was asked under oath whether the president could, in Sen. Russell Feingold's (D-Wis.) words, "authorize warrantless surveillance notwithstanding the foreign intelligence statutes of this country." At the time, of course, the National Security Agency's controversial warrantless domestic surveillance program was well under way. Gonzales knew it. But Committee members did not.

So what did Gonzales say back in January 2005? At the time, he told the committee: "It's not the policy or the agenda of this president to authorize actions that would be in contravention of our criminal statutes." That answer, Sen. Feingold now says, was "misleading" and designed to deflect the Senate's attention away from the existence of the program. "You could have answered the question truthfully," Feingold scolded Gonzales Monday. "You could have told the Committee that, yes, in your opinion, the president has that authority."

Gonzales shot back. "I told the truth then; I'm telling the truth now ... You asked about a hypothetical situation of the president ... authorizing electronic surveillance in violation of our criminal statutes. That has not occurred." Yes, Feingold, said, but you, Attorney General, knew that my question wasn't really a hypothetical. This exchange occurred after Senate Democrats on the committee tried unsuccessfully to have Gonzales sworn in so that his statements could ultimately, theoretically, give rise to a perjury investigation.

Whether Gonzales told the truth last year is still open to debate — as is the administration's position that the program does not violate the law. But the exchange between the committee Democrat and the attorney general highlights the atmosphere of distrust that wafted through the first Congressional hearing into the eavesdropping program that purports to monitor communications between al Qaeda suspects here and abroad. In the main, the Republicans on the Judiciary Committee were willing to give Gonzales the benefit of the doubt about the legal and factual assertions he was making on behalf of the president. By and large, the Democrats were not.

If Monday's hearing is any indication, the administration has a bit of a "trust" problem about a surveillance program the proponents of which have asked the American people to "trust them" to ensure that there are no excessive violations of privacy rights. Clearly, there is a perceived credibility gap — at least on the part of several Democratic Senators — between what the White House is doing and what it is saying to Congress when it comes to the legal war on terror. And nothing Attorney General Gonzales appeared to do or say during his long hours in the hot seat Monday narrowed it. In fact, it's probably as wide as it has been since the program was disclosed by The New York Times late last year.

Soon after the hearing started, for example, Sen. Patrick Leahy (D-Vermont) bore in on the question of whether the administration planned to authorize the domestic spy program before the Congress passed its Authorization for Use of Military Force back on Sept. 14, 2001. This is important to know because if the White House already knew then that it planned to rely upon the ambiguous "necessary and appropriate" language of the AUMF to justify the program, and didn't say so, it effectively pulled a fast one on Congress, which certainly wasn't thinking about allowing electronic surveillance without a court order when it gave its consent to the White House to go after Osama bin Laden.

Then it was Sen. Charles Schumer's (D-N.Y.) turn. He asked the attorney general: "Has the government searched someone's home, an American citizen, or office, without a warrant since 9-11, let's say?" Gonzales replied: "To my knowledge, that has not happened under the terrorist surveillance program, and I'm not going to go beyond that." That prompted this retort from Schumer: "I don't know what that — what does that mean, under the terrorist surveillance program? The terrorist surveillance program is about wiretaps. This is about searching someone's home. It's different ... I'm asking you if it has been done, period." Gonzales said: "But now you're asking me questions about operations or possible operations, and I'm not going to get into that, Senator."

Even the Judiciary Committee Chairman, Arlen Specter (R-Pa.), tried to pin down the attorney general about the scope of the program. "What assurance can you give to this committee and beyond this committee to millions of Americans who are vitally interested in this issue and following these proceedings? Gonzales responded, " ... The program as operated is a very narrowly tailored program. And we do have a great number of checks and balances in place to ensure, I am told, by the operations folks that, to a great degree of certainty, a high degree of confidence, that these calls are solely international calls."

The reason these snippets of dialogue are important is that they evidence a realization on the part of important senators that, even now, the administration is not leveling with the legislative branch when it comes to the ways in which the war against terrorism is being fought. The attorney general did not apologize for his lack of specificity Monday; in fact, he and several Republican committee members noted that the executive branch has to maintain operational secrecy even from its own allies in the war on terror. That's a logical argument. But it surely is one that makes it harder for the Congress to feel good about continuing to give the administration free rein to fight.

The White House wants us all to trust it to run this controversial program. And yet it is rebuffing efforts on the part of the Congress to independently verify how the program works, what it actually does, and whom it may affect. The oversight for the NSA program now resides with the NSA, and otherwise within the executive branch, without any input from the legislative or judicial branches. Of the Soviets, the late President Reagan once said, famously, "trust but verify." Makes sense, right? But which ought to come first? And why should the president and his oracles expect to earn one without offering the other?