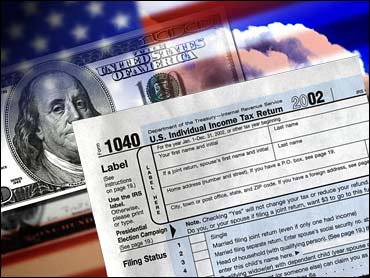 The $350 billion tax package passed by Congress may have been signed into law by President Bush this week, but debate continues on how the measure will affect poor families and federal deficits.

Democrats are chiding the White House and its GOP allies in Congress for a provision in the bill that exempts certain low-income families from a child tax credit.

Meanwhile, a newspaper is reporting that the White House failed to include in its budget report to Congress a Treasury Department analysis that predicted looming massive deficits — totaling $44 trillion — and prescribed large spending cuts and tax increases to reduce the red ink.

The dust-up over the tax credit provision and the deficit report echo arguments made during the debate over the president's tax cut proposals, and forecast debates that may dominate the 200 presidential campaign.

In what the Bush administration had labeled "class warfare," Democrats had already criticized the battery of tax cuts as favoring wealthy households, particularly with its reductions in dividend and capital gains taxes, which are more likely to be paid by the rich.

The bill's opponents also said the tax cuts reflected bad economics. In an economy in need of immediate stimulus, Democrats said, tax cuts should favor the poor and middle classes — those most likely to spend the extra money.

Now Democrats are applying those same arguments to the restrictions imposed on the child tax credit.

A provision to include them in the relief was approved by the Senate, but was dropped in the compromise version that won final approval from the House and the Senate and was signed into law.

White House press secretary Ari Fleischer said Mr. Bush would have signed the bill if it would have included the credit for low-income families, but the bill still creates jobs and grows the economy without the provision.

"Low-income families are treated differently because of the fact that they don't pay income taxes at the same rate that somebody not on the earned income tax credit does," he said.

However, the provision would have cost a mere $3.5 billion — roughly 2 percent of the total tax cut on dividends and capital gains included in the law.

"The people who are at the lowest income levels are precisely the ones that you would want to put money in their pocket," Florida Sen. Bob Graham said Thursday. "They're the ones who certainly are going to spend it to help create the demand to move us forward."

Connecticut Sen. Joe Lieberman, campaigning in California, called the exclusion "an unconscionable choice that leaves millions of children behind, a betrayal of the basic promise of compassion to families."

The $350 billion tax cut was a pared-down version of the president's original $726 billion proposal and a House bill that totaled $550 billion.

The Republican-run Senate approved the bill, 51-50, last Friday with Vice President Dick Cheney's vote breaking the tie. The House had passed it, 231-200, earlier in the day.

The tax cut has already come in for criticism for the way lawmakers reduced the price tag to $350 billion.

Several of the tax cuts are scheduled to disappear in a few years, limiting the cost of the bill. But lawmakers have said they plan to reinstate the reductions.

According to the liberal Center for Budget and Policy Priorities, if those temporary provisions are made permanent, the cost of the tax cut sells to between $800 billion and $1 trillion.

That raises the possibility of larger deficits down the road. Many Republicans have defended the need for deficit spending now because the economy is in recession, and predict that lower taxes will spur growth and actually increase tax revenues.

But Democrats say the deficits imperil retirees because some of the shortfall will be covered by borrowing from the Social Security trust fund. Deficits also could push up interest rates by limiting the money available for investment, hampering the economic recovery.

London's Financial Times reported that the administration kept a report out of the budget that shows the United States faces more than $44 trillion in deficits.

According to the newspaper, the report estimated that the size of the future shortfalls — at 10 times the current federal debt — would necessitate belt-tightening measures equal to raising taxes 66 percent.

The White House denied suppressing the report, with Budget Director Mitch Daniels calling the allegation "probably the most absurd thing that I can imagine."

An administration source told the Financial Times that each year, many pieces of research do not make it in to the final budget presentation.