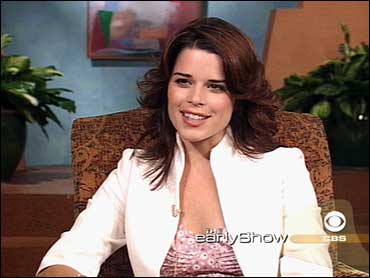 Actress Neve Campbell may be best known for her role in the "Scream" trilogy, but in her new movie "When Will I Be Loved" you'll see her as you've never seen her before.

As Vera, she plays a rich young woman who has men trying to manipulate her, but she ends up out-manipulating them at their own game.

"She's got several people in her life that are sort of underestimating her intelligence," Campell tells The Early Show co-anchor Hannah Storm. "It's sort of how she responds to that and she becomes somewhat vengeful because of that."

Her boyfriend, played by Frederick Weller is sort of a loser. "He is manipulative and I discover early on in the film that he is manipulating me and making an indecent proposal," Campbell explains. A character named Count Tommaso, played by Dominic Chianese from "The Sopranos," is intrigued by her and offers her money in exchanged for some favors.

"And my character, although she is sexually explorative and curious in her life, she is also very intelligent and doesn't appreciate the offer," Campbell says. "It's a fun character to play. I think it's fun in the sense it's an unapologetic character. I love our writer-director, James Tobeck. The film is really intelligent. "

An independent film, it was shot in 11 days. Asked what she liked most about being in these types of films, she says, "You're not restricted by a studio, creatively. When i met James, I had seen many of his films before and I admired him. He sent me 35 pages of the script and that's all we had to begin with."

That meant a lot of improvisation, she notes. We "came up with ideas and shoot, and James would write it in the evening and we'd learn in the morning, and continue. It's a fun way to play. You don't have that freedom when you're working with a studio. They're spending a lot of money so they have a lot more control over what you're doing. So it was nice."

In one particular scene Campbell appears nude, though she used to have a clause in her contract that said, no nudity. Why the change?

"I used to have an issue or do have an issue with nudity in the films if I feel it has nothing to do with the film itself. I feel it's for box office draws and I have an issue with it," she says. But in this case it was different. "A lot of this is about sexuality and it put my character in a raw place in the beginning of the film."

The shower scene was shot the first day, which Cambell says was good for her because she didn't have to worry about it for the rest of the film.

That meant baring it all in front of the crew. "Four guys in the shower with me," she says. "Somewhat intimidating, but after two minutes, it's been bared and there is nothing to hide."

James Toback's independent film, "When Will I Be Loved," opens in theaters Friday, Sept. 10.

Next for her is "Churchill," a film that is being released in England first, and a comedy with Danny DeVito called "Relative Strangers."