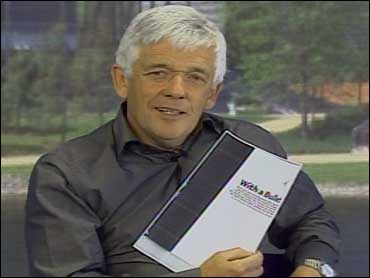 In the good old days, once I had finished with a piece of paper, I would screw it into a ball, throw it in the trash, and forget about it. No longer. You see, Britain is a small island, and we have almost filled up all the holes in the ground with trash -- and there's no space left. So out there, this green and pleasant land is disappearing under a mountain of trash.

We may look all right from a distance, but actually this country is filthy, with paper, cardboard and plastic wrapping drifting around our streets, old beds and used car tires thrown into our hedge rows.

Such is the scale of the problem that the great American author Bill Bryson, who now lives here, has launched a national campaign to eradicate litter from the countryside. He wants big fines for those who make a mess, and he is not alone. All over Britain, local councils are introducing a bewildering variety of ideas to ensure we clean up our act.

At my home, I have a green trash can for vegetable waste and another for bottles, one container for plastic and another for aluminum cans, a box for newspapers and a black trash can for everything else -- and if I put the right thing in the wrong can, or the wrong can out on the right day, my trash is thrown back onto my lawn. And I am lucky. My council is a reasonable one.

Other councils will fine you for putting -- let us say -- plastic in with the paper. They can also fine you for putting out too much trash, so that the lid will not close. There are even pilot schemes for secret cameras in some trash cans, and microchips to weigh your trash and make you pay per pound of waste.

Many councils are now only collecting the trash once every two weeks to encourage us to recycle more. The rats are delighted. And Bill Bryson wants a network of undercover teams to watch out for what we call fly tippers -- those who can't be bothered with the new arrangements and dump lorry loads of trash in the countryside.

I don't know about you, but there is something about all of this that really annoys me. I hate trash. I do everything I can to keep my little bit of Britain as tidy as I can, but surely there has to be a better way ahead.

Maybe we should follow the example of the French, who covered over a trash site in Paris and turned it into a park. Perhaps we should build a series of elevated parks on great piles of trash, then lie on the grass in the sun and wait for global warming to take effect.
By Peter Allen