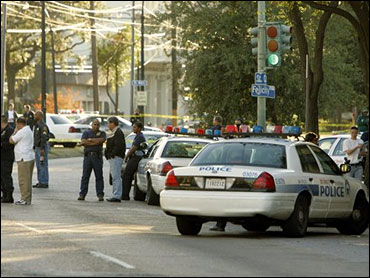 Anthony Hayes, 38, was shot Monday after allegedly lunging at police with a 3-inch blade.

Part of Hayes' confrontation with 18 officers, though not the shooting itself, was videotaped by at least three bystanders. Hayes is seen waving his arms and brandishing the knife.

Police Superintendent Warren Riley said Hayes had a long record, but he wouldn't give details.

He told reporters he knew nothing directly about Hayes' mental health, only that relatives told television stations he was schizophrenic.

Two sergeants and one patrol officer fired nine shots after Hayes tried to stab a lieutenant, Riley said. He said he did not have an autopsy report, so he did not know how many bullets hit Hayes.

The incident began when Hayes' credit card was rejected at a drug store, according to Riley. He said Hayes punched a clerk or manager, opening a facial cut.

The first two officers on the scene tried to calm Hayes, who became aggressive and pulled a knife, and 16 more officers came to help.

Patrol officers don't carry stun guns or beanbag guns, and there was no time to bring in a SWAT team, which might have had such equipment, Riley said.

"It happened within three minutes. SWAT couldn't have made it there in that time," Riley said. "And it's not a situation where normally SWAT would have been called."

The officers would have betrayed their police training if they had aimed to fire a non-lethal shot, Riley said Tuesday. The officers are trained to treat knife attacks as deadly force and are not schooled in disarming suspects with knives using hand-to-hand combat.

"The vast majority of police departments, state, local and federal, are trained to shoot-to-kill ... either the head or the chest area," he said.

An internal review will officially determine whether proper procedures were followed, Riley said, but all witness accounts seem to indicate that the shooting was justified. The officers who fired at the man have been reassigned pending an investigation.

The head of an independent watchdog group agreed that the shooting appeared to be justified, but said the death is another black mark for a beleaguered department.

"Even if it's determined that officers have done nothing wrong, the people will continue to have a negative opinion of police in this city" because of scandals over the past 10 to 15 years, said Rafael Goyeneche, executive director of the Metropolitan Crime Commission of Greater New Orleans.

Hayes' death follows the Oct. 8 videotaped beating of a retired teacher in the French Quarter that led to the firing of two officers last week, as well as a long string of pre- and post-Katrina problems. Immediately after the storm hit Aug. 29, some officers were accused of deserting their posts, others of looting.

Before the storm, the department's checkered history included corruption investigations and the conviction in the 1990s of an officer who arranged the murder of a woman who filed a brutality complaint against him.

One witness, local defense attorney Robert Jenkins, said police showed "great restraint" in the shooting Monday. "They hit him with a host of pepper spray and he still doesn't go down," said Jenkins. "He just wipes his face like it's nothing."

Phin Percy videotaped a portion of the incident from his father's second-story apartment. "The cops kept telling him, 'Lay down! Lay down!' This went on for about three minutes," he said.

Percy told CBS News correspondent Trish Regan that from everything he had witnessed leading up to the shooting, he thought it was justified.

"This man was threatening the officers," he said. "He wouldn't listen to the simple commands of putting the knife down and laying on the ground."