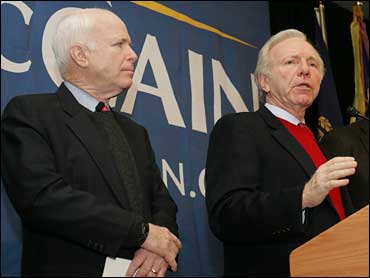 This column was written by The Editors Of National Review Online.

Conservatives who skipped the Olympics on Saturday to watch John McCain's gold-medal performance at Rick Warren's Saddleback Church saw a man they can affirmatively support for president, as opposed to a Republican candidate they merely prefer to Democrat Barack Obama. When he announces a running mate, McCain should seek to build on this momentum - rather than shatter it, as he would if he were to pick Connecticut senator Joe Lieberman or former Pennsylvania governor Tom Ridge as his running mate.

"As president of the United States, I will be a pro-life president and this presidency will have pro-life policies. That's my commitment. That's my commitment to you," said McCain on Saturday. Nothing would do more to undercut this assurance - or to demoralize McCain's base - than the selection of a vice-presidential nominee whose record and convictions don't match this pledge. Also, although you would never know it reading the media, abortion is a winning issue for Republicans, and it's not as though the party has so many of those that McCain can afford to throw it away. Yet he seems to be flirting with the possibility of a pro-choice vice-presidential pick. "I think that the pro-life position is one of the important aspects or fundamentals of the Republican party," said McCain last week in an interview with Stephen Hayes of the Weekly Standard. "And I also feel that - and I'm not trying to equivocate here - that Americans want us to work together."

If "working together" on abortion is the rationale, then Lieberman should immediately be disqualified from vice-presidential consideration. Lieberman, a Democrat-turned-quasi-independent, is a good man who has demonstrated an admirable ability to follow his conscience on important issues, the war foremost among them. On abortion, he's just wrong. His voting record earns perfect marks from pro-abortion groups such as NARAL. He has even opposed a ban of partial-birth abortions, which is one proposal in recent years that has managed to unite confirmed pro-lifers and moderate pro-choicers.

There are other reasons to oppose the choice of Lieberman. Last year, he earned a rating of just 8 percent from the American Conservative Union - a single point better than Obama's score of 7 percent. (McCain's rating was 80 percent.) On issue after issue, Lieberman would clash with the man on the top of the GOP ticket. Rather than allowing McCain to snatch the mantle of post-partisanship, these abundant contradictions would threaten to sink the "Straight Talk Express" into a morass of disagreement and inconsistency.

When McCain made his comment about the need for pro-lifers "to work together" with pro-choicers, he wasn't talking directly about Lieberman. He was talking about Ridge: "You know, Tom Ridge is one of the great leaders and he happens to be pro-choice. And I don't think that that would necessarily rule Tom Ridge out [for the vice presidency]," McCain said. The comment was widely interpreted as a trial balloon. Whatever the motivation, the notion deserves pricking.

Although Ridge isn't pro-life, neither is he a pro-abortion militant. Along with a majority of Americans, he supports reasonable restrictions such as a ban on partial-birth abortion and a requirement that minors obtain parental consent. He's an adoptive father. But his nomination for vice president would still alienate many of the voters whose enthusiasm McCain needs.

And Ridge poses a deeper dilemma. He isn't a conservative who happens to be pro-choice, but rather a moderate who has abandoned conservatives time and again. When Ridge was a congressman during Ronald Reagan's second term, Congressional Quarterly found that he was more likely to oppose White House initiatives than to support them. Some of these quarrels involved labor policy, which was perhaps understandable given Ridge's Erie-based congressional district. Others were strange, such as Ridge's support of the nuclear-freeze movement and his hostility toward missile defense.

Finally, it must be said that Ridge never has been "one of the great leaders," even in the rhetorically superlative world of American politics. His two-term governorship of Pennsylvania yielded no special hallmarks of conservative reform - instead, its missed opportunity to deliver school choice remains a frustrating failure. Likewise, Ridge's tenure as the first secretary of the Department of Homeland Security was unspectacular at best.

Heading into the conventions, McCain remains an underdog. Yet his situation is far from desperate. For vice president, he should make a choice that's conservative in both meanings of the word.

By The Editors
Reprinted with permission from National Review Online