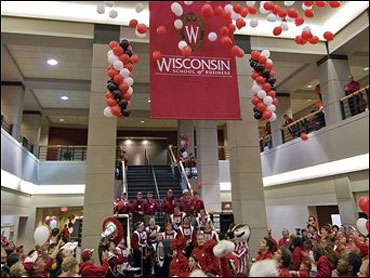 When he became dean of the University of Wisconsin-Madison School of Business in 2002, Michael Knetter went looking for a big donor, someone who would give $50 million in exchange for putting their name on the school.

So, Knetter decided to do something radical: find contributors willing to pay to keep the school's name off the market.

After years of conversations, 13 alumni announced last month that they were giving $85 million in exchange for assurances that the business school would not be named for any donor for at least 20 years.

It's the biggest donation in university history, and it comes at a time when stadiums, buildings and whole colleges elsewhere are being named for the highest bidder.

"It is an unprecedented act of selfless philanthropy. I don't know of another case where anything remotely like this has taken place and I hope it is the start of a trend," said Terry Hartle, senior vice president for the American Council on Education. "It's the most interesting development in philanthropy I've seen in the last year."

Rae Goldsmith, a spokeswoman for the Council for Advancement and Support of Education, called the gift "an unusual take on a long tradition."

"It's certainly a new and very generous approach," she said.

The donors are all Wisconsin alumni and 10 of them graduated from the business school. Each pledged at least $5 million to join the partnership. They include Ab Nicholas, who played basketball for Wisconsin in the 1950s.

"It sends a message that people can band together for a common cause and they don't need a lot of recognition," said Nicholas, who founded an investment firm and lives in Chenequa, Wis. "It's sort of selfless and yet it isn't because the people giving the money feel good about it."

Nicholas said he was proud the gift allows the university to keep its well-respected name. "The University of Wisconsin-Madison School of Business. That sounds great," he said.

Hartle said many public universities have marketed naming rights to law, business and medical colleges in the past 10 years to make up for lagging tax support. Business schools have been particularly aggressive, with the majority of them already named for donors.

But when they weren't ready, he changed his approach. He said he was bothered that one person would get the name and other donors would be left out. And he learned the price of naming rights was going up and that keeping the name for now would be a strategic asset. After 20 years, he estimates, the naming rights on the school could bring in $300 million or more.

At first, donors thought Knetter's idea of paying to not sell the name was wacky.

Finally, three donors bought into it 18 months ago, promising $20 million. Pledges slowly grew to $30 million, then $40 million, then hit the goal of $50 million and reached $60 million.

He planned an announcement for a homecoming event last month, but more pledges came in - $20 million more from four donors in the final week, then a $5 million promise just two hours before he went public.

In an interview, Knetter said he was still trying to figure out how to spend the money, beyond increasing salaries, hiring more faculty and staff, and serving more students.

"This thing has succeeded beyond my wildest dreams," he said.

The final $5 million pledge came from Milwaukee businessman Sheldon Lubar, who already has a business school named in his honor at UW-Milwaukee after he gave that university $10 million last year.

"Someone told me 'You're the only person in the United States that's going to have two business schools named after you or not named after you,"' Lubar said. "Well, that even makes it better, doesn't it."