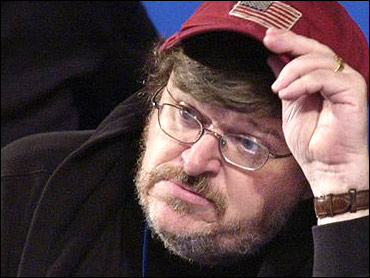 This column from National Review Online was written by Jim Geraghty.

It's good to see that Michael Moore can afford a razor and a haircut, and some flattering...okay, less unflattering clothes. (Moore said he just wanted to look his best for his IRS audit. Good line.)

Despite his new look, it is time for Democrats to start the effort to bring their party back to the center, and a key element in this effort will be for some high-profile Democrat to pick a very public, very nasty fight with Michael Moore, and begin the process of expunging the Moore virus (symptom: rabid rhetoric) from the party's body politic.

I realize the Democrats aren't inclined to take advice from a guy like me. And I realize that Republicans will react to this advice by saying, "Shhhhh! What, do you want the Democrats to come out of the wilderness before 2024?" But this needs to be said, whether any Democrat will pick up this sword or not.

Peter Beinart, editor of The New Republic, has risen to the challenge with a detailed essay, and this is a good first step. But that magazine has always had a bit of a hawkish streak, and their criticism may get disregarded among Democrats as predictable distaste for a rabble-rouser of the party's base from a Washington centrist.

Moore's distance from mainstream American political thought became clear to me a few days ago, when, desperate for reading material in an airport, I picked up Moore's 2003 book, Dude, Where's My Country and came across a stunning chapter entitled, "Horatio Alger Must Die."

[Horatio] Alger was one of the most popular American writers of the late 1800s. Alger's stories featured characters from impoverished backgrounds who, through pluck and determination and hard work, were able to make huge successes of themselves in this land of boundless opportunity. The message was that anyone can make it in America, and make it big.

We're addicted to this happy rags-to-riches myth in this country. People elsewhere in other industrialized democracies are content to make a good enough living to pay their bills and raise their families. Few have a cutthroat desire to strike it rich. If they have a job that lets them go home after seven or eight hours of work and then gives them the standard four to eight weeks of paid vacation every year, they're relatively happy. And with their governments providing health care, good free schools, and a guaranteed pension to live well in old age, they're even happier...

They live in reality, where there are only going to be a few rich people, and you are not going to be one of them. So get used to it...

Listen, friends, you have to face the truth. You are never going to be rich. The chance of that happening is about one in a million. Not only are you never going to be rich, but you are going to have to live the rest of your life busting your butt just to pay the cable bill and the music and arts classes for your kid at the public school where they used to be free.

Rarely will one see the view of the Left explained so succinctly: It's the anti-self-help message. If your life stinks, it's not your fault, and cannot be explained by lack of hard work, or willingness to learn new skills, or lack of persistence in the face of setbacks. It's all these powerful forces holding you back!

Moore's argument is essentially, "You can never get ahead. Only the government can help you. Settle for the predicable, immutable, perpetual dependent existence that only government aid can provide!"

Workers of the world, unite! You have nothing to lose but your hopes for a better tomorrow!

Then there was the chapter that began:

There is no terrorist threat.

Since 9/11, Democrats have been trying to persuade the public that the "Mommy party" is tough enough and serious enough to deal with a dangerous world. And Moore, attempting to accuse Bush and the Department of Homeland Security of scare-mongering, leaps way beyond logical and persuasive rhetoric into arguing America's fears of another terrorist attack are irrational.

The chapter has another, more valid, point: that the media sometimes overhypes the likelihood of a terror attack. But by then, the damage is done -- Moore has epitomized the liberal who refuses to see the dangers of a worldwide effort by militant Islamists to kill infidels and especially citizens of the Great Satan.

Since he emerged on the national stage, Moore has been saying things that a liberal minority loves to hear -- and that a majority of Americans finds offensive, repulsive, irritating, or infuriating.

We can think of his comments on September 12, 2001: "If someone did this [the WTC attack] to get back at Bush, then they did so by killing thousands of people who DID NOT VOTE for him! Boston, New York, D.C., and the planes' destination of California -- these were places that voted AGAINST Bush!"

As if what mattered at that moment was the political affiliation of the thousands of victims.

Then there was his oft-repeated comment from March 14 of this year, about those killing U.S. soldiers and killing hostages in Iraq: "The Iraqis who have risen up against the occupation are not 'insurgents' or 'terrorists' or 'The Enemy.' They are the REVOLUTION, the Minutemen, and their numbers will grow -- and they will win."

Then the world witnessed the surreal phenomenon of Osama bin Laden, on videotape, referring to Fahrenheit 9/11's depiction of Bush listening to a girl reading My Pet Goat. One wonders whether the world's most wanted terrorist had time to catch Bowling for Columbine too.

Quote comments like these to a Democratic strategist like James Carville, who wants to actually win elections, rather than hyperbolically spout distilled liberalism, and he'll break out in hives. (In fact, maybe Carville is the right Democrat to rip Moore. He's pugnacious enough.)

A certain number of Americans love Moore; thus his future films are guaranteed hits. But a larger percentage hates him (he was booed on the Tonight Show) and it seems a certain chunk of the middle is repelled by him. On balance, it doesn't appear that Moore has done the Democrats too many favors.

There is no equivalent figure to Michael Moore on the right -- and that's a good thing for Republicans. And liberals do themselves a disservice if they respond to this argument by pointing to shrill voices on the right and insisting they're worse. For starters, it's exactly what Moore would do. Plus, frankly, the Republicans are riding high right now -- Bush wins 61 million votes and the first majority since 1988, expanding margins in the House and Senate, and a majority of governorships.

The Democrats will never win a majority so long as Michael Moore is seen as one of the animating spirits of the party.

His criticisms of President Bush are often laced with inaccuracies and distortions, and he has a blind spot for excusing America's enemies. His books and longer works just pile up, one after another, "Bush messed up" assertions, a litany of complaints that offers no real solutions or ideas on the war on terror, economics, or any other issue. And his life story contradicts his disturbing view that Americans should abandon their pursuit of wealth and success and settle for the dull mediocrity of a European welfare state.

And yet on the left, seldom is heard a discouraging word when the topic is Moore.

As Moore begins to campaign for a best-picture nomination, now would be the time for someone on the left who takes the war on terror and the American Dream seriously to shatter the Democratic party's lockstep behind. Will any Democrat -- besides Beinart and the usual centrists like Joe Lieberman -- have the guts to publicly echo John McCain, the media's favorite Republican, and call Moore a "disingenuous filmmaker"?

Jim Geraghty is a NRO contributor.

By Jim Geraghty
Reprinted with permission from National Review Online