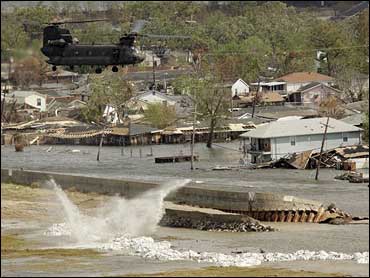 The mammoth tasks of restoring power to much of New Orleans and removing heaps of debris, interrupted when Hurricane Rita rammed the Gulf Coast, resumed Sunday as the mayor pushed his plan to reopen parts of the city this week.

Even those areas newly flooded this weekend by Rita could be pumped dry again within a week after levee damage is repaired, far sooner than initially predicted, a U.S. Army Corps of Engineers spokesman said Sunday.

"All indications are all operations are getting back to normal," said Ted Monette, deputy federal coordinating officer for Katrina recovery.

Monette said federal officials had been coordinating with New Orleans Mayor Ray Nagin's effort to begin allowing evacuated residents to return and were supportive of his plan.

Nagin is pushing for the return of 250,000 residents to dry neighborhoods (video).

The signs of renewed life included widespread utility trucks restoring electricity and restaurants seeking customers, such as the Slim Goodies diner in the Garden District.

"You wanna burger?" owner Kappa Horn called out to the steady stream of police and others who came by.

Horn's diner doesn't have electricity, but she has been using supplies driven in from Baton Rouge, Louisiana, and New Orleans' West Bank to serve pancakes and burgers for more than a week. She closed for two days when Rita came through.

"The city is not going to survive unless it's got people in it," Horn said. "I want to be part of rebuilding my city."

Residents of the Algiers neighborhood, which has working power, water and sewer services, could be allowed to return Monday or Tuesday, followed by people in other postal codes, Nagin said.

Nagin suggested that only people who are mobile — not families responsible for children or senior citizens — come back. "That's going to be the reality of New Orleans moving forward."

However, Coast Guard Vice Adm. Thad Allen, who is in charge of the federal disaster effort in the city, sounded a cautionary note. The city can continue allowing business operators to return to unaffected areas and letting residents return to the West Bank and Algiers, he said.

"Where the mayor needs some thoughtful approach to is the areas that have been reflooded and the areas that may remain uninhabitable for safety, health and other reasons," the admiral said Sunday on ABC's "This Week." "And I think a timetable associated with that still needs to be worked out."

A handful of evacuees returned to the city aboard a flight from Cincinnati, Ohio.

"You go from joy to disbelief to sadness to just being tired, to just wanting to go home," said Paul Jordan. "Our goal is to help rebuild the city, and we're going to do whatever we can."

But not everyone headed back to New Orleans plans to stay.

Haney Joudeh has resettled in Chicago and was coming to take photos of his clothing store, which he heard was looted, for the insurance company.

"It's like starting a life all over. That's it for me. There's nothing left," Joudeh said.

Most of the city was spared significant new damage when Rita struck near the Texas-Louisiana line, but the hurricane's rain and storm surge partially breached levees along the Industrial Canal, causing renewed flooding in the Ninth Ward. That is the section of east New Orleans that was submerged by Katrina and pumped dry just days before the second big storm.

The Army Corps of Engineers worked through the night to pile rocks and sandbags in the breaks. Workers believe that once the breaches are closed, the Ninth Ward can be pumped dry in a week, said Mitch Frazier, a spokesman for the corps. Federal officials had estimated Saturday it would take two to three weeks to pump out the water delivered by Rita.

Entergy, the state's biggest power company, was assessing new damage that Rita caused for customers in hard-hit southwestern Louisiana, but work continued in New Orleans, said Chanel Lagarde, a company spokesman. More than 200,000 customers still lack power in the New Orleans area, but many are in badly damaged areas.

Entergy has restored power to most of the city's central business district, and hopes to tackle work in the French Quarter early this week, he said.