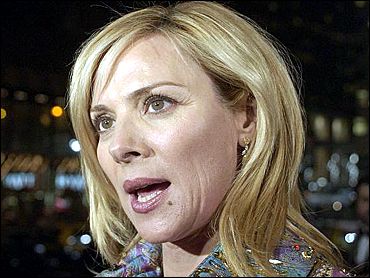 Kim Cattrall said she didn't want any more "Sex and the City," so that means her co-stars Sarah Jessica Parker, Cynthia Nixon and Kristin Davis won't be getting any either.

At least for a while.

HBO representatives said Cattrall's refusal led the cable channel to drop the idea of a feature film based on the popular series, which ended its six-season run this year.

"Kim felt fortunate to have enjoyed six wonderful years, both personally and professionally, playing Samantha on 'Sex and the City,"' said Cattrall spokeswoman Marvet Britto in a recent statement.

"She would have loved to have done the movie and made a deal to do the movie, but waited as long as possible with no script or start date and felt she had to take other offers that were presented to her after the hold period had passed."

Cattrall has instead signed on to shoot "Ice Princess" for Walt Disney Pictures.

It's possible that she could revisit the role of the seductress Samantha at a later time.

"Kim would of course love to do the film and would be happy to revisit the project in the future," Britto said.

There may have been other obstacles in the road to a "Sex" movie.

The trade newspaper Variety reported this week that Cattrall wanted script approval, which the other actresses were denied. Parker, the show's central character, was also to be paid more, according to Variety, and Cattrall wanted the same fee — and was rejected.