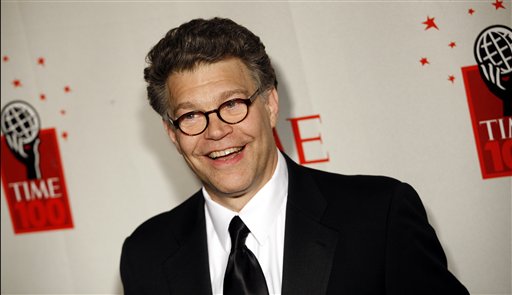 Franken's announcement came on the final day of his radio show on Air America. The former "Saturday Night Live" performer's celebrity instantly makes him a heavyweight contender and brings national attention to the Minnesota race.

"Minnesotans have a right to be skeptical about whether I'm ready for this challenge and to wonder how seriously I would take the responsibility that I'm asking you to give me," Franken said in a video clip posted on his Web site.

"I want you to know: nothing means more to me than making government work better for the working families of this state, and over the next 20 months I look forward to proving to you that I take these issues seriously," Franken said in a transcript of the clip.

Though Franken has a well-known name and is likely to be well-funded, he's expected to be challenged by several other Democrats, including wealthy trial attorney Mike Ciresi.

His candidacy will also test whether Minnesotans are in the mood for another celebrity-cum-politician, after the 1999-2003 governorship of former pro wrestler Jesse Ventura. Ventura's fame and occasionally outrageous behavior regularly brought national attention to the state — but after a while, he also wore on the patience of many Minnesotans.

"He's serious. He's a comic but he's serious," Stephen Hess, a professor of political science at George Washington University, said of Franken. "He's not doing this as some folks have done it to give them better gigs on the Borscht circuit."

Franken, 55, was born in New York City but grew up in the Minneapolis suburb of St. Louis Park. He graduated from Harvard University in 1973, and in 1975 he and writing partner Tom Davis joined the writing staff of "Saturday Night Live" during its first season. They soon started appearing in sketches, and Franken remained a fixture on the show well into the 1990s.

In 1996 Franken took his career in a political direction when he wrote "Rush Limbaugh Is A Big Fat Idiot and Other Observations," a broadside against the conservative radio host and other figures on the right. He's since published several other books critical of Republicans and the conservative establishment.

As early as 2003, Franken said he was considering a run for the Minnesota U.S. Senate seat previously held by his friend, the late Democratic Sen. Paul Wellstone.

In 2004 Franken joined the upstart liberal radio network Air America as its biggest-name host. He soon got more directly involved in politics, forming a political action committee that raised more than $1 million for Democratic candidates in the last election cycle.

In 2005, Franken and his wife, Franni, moved back to the Twin Cities, which was widely interpreted as laying the groundwork for a campaign. He announced a few weeks ago that Wednesday would be his last day on Air America, but continued to play coy about his aspirations while privately telling prominent DFLers about his plans to run.

Franken is stringing out his announcement over two days — Wednesday's announcement, and a scheduled first public appearance as a candidate Thursday morning at a clinic in south Minneapolis.

In his Web site message, Franken acknowledges he's not a "typical politician." But he stresses his Minnesota roots, talking about his father's decision to open a quilting factory in Albert Lea that failed after two years, prompting the family's move to the Twin Cities.

"I grew up in a hard-working middle class family just like many of yours. And as a middle-class kid growing up in Minnesota back then, I felt like the luckiest kid in the world. And I was."

Coleman is viewed as vulnerable after several years of Democratic resurgence in Minnesota and the continued unpopularity of his fellow Republican, President George W. Bush. But his proven skills as a campaigner and adept fundraiser make him a formidable opponent.

Franken has had little good to say about his potential opponent. In his latest book, "The Truth (with jokes)," he criticized Coleman in not-so-flattering terms for his former chairmanship of the Senate's Permanent Subcommittee on Investigations.

"The subcommittee's chairman, Minnesota Republican Norman Coleman, is one of the administration's leading butt boys," Franken wrote. "He hasn't held a single hearing on postwar corruption."

Hess, the George Washington analyst, said: "Whatever else goes on, Al Franken is going to make it an infinitely more interesting race. And he may even provide a few laughs, and that's not so bad either in the grim days we're facing."

Justice Department to seek prison time for Texas family of 5 in Jan. 6 case
Thanks for reading CBS NEWS.
Create your free account or log in
for more features.
View CBS News In
CBS News App Open
Chrome Safari Continue
Be the first to know
Get browser notifications for breaking news, live events, and exclusive reporting.