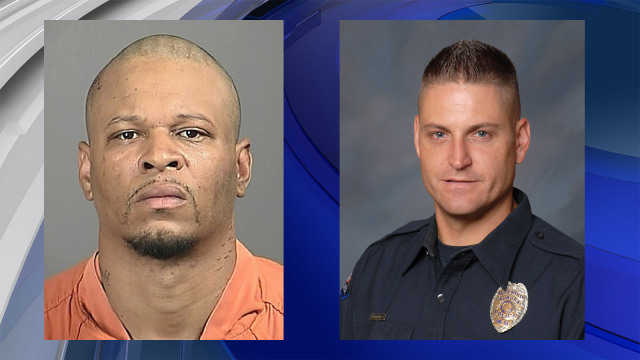 The grand jury concluded Aurora police officer Paul Jerothe believed he was about to be killed and acted reasonably in shooting Naeschylus Carter Vinzant, 37, in an east Denver suburb on March 6, prosecutors said.

Vinzant was on parole for a prior assault conviction and had cut off his monitoring bracelet and fled after beating his wife, stealing her wallet and taking their 2-month-old child four days earlier, authorities said. A report by the grand jury identified the woman as both Vinzant's wife and ex-wife.

Days later, Jerothe was part of a tactical team that descended on Vinzant as he walked down the street, the station reported. Prosecutors said the officer believed Vinzant was about to pull a gun and open fire, so Jerothe shot Vinzant once in the chest. Officers later realized the man he shot was unarmed.

In Colorado, prosecutors typically investigate officer-involved shootings without a grand jury. But District Attorney Pete Weir said a grand jury was the best way to provide a thorough and impartial review of Vinzant's shooting in this case, citing its complexity.

An attorney for Vinzant's family didn't immediately return a call from the station Wednesday. Police and the grand jury said the suspect's last name was Vinzant, but an attorney for the family said he used Carter as his last name.

The Aurora Police Department will conduct an internal review of the shooting to determine whether Jerothe or any other officers violated department policy, Chief Nick Metz said.

Metz said he hadn't read the grand jury's report and couldn't make a judgment about whether Jerothe acted appropriately.

One report said Vinzant had told an officer nearly two years earlier that he would have "shot it out" with police during a September 2013 arrest if he had been in possession of a weapon.

The grand jury report suggested some witnesses thought Vinzant might have been trying to surrender, but the grand jurors concluded those witnesses were incorrect. The report said twice that Vinzant gave no indication he wanted to give up.

Jerothe received national honors for saving lives in the 2012 Colorado movie theater shooting. He is still working in a "nonenforcement capacity," Metz said.

Vinzant's family was saddened by the grand jury's decision not to indict Jerothe but continues to seek justice, attorneys Qusair Mohamedbhai and Siddhartha Rathod said in a statement. Vinzant "is but one person on an ever-growing list of unarmed victims of police-related killings whose families have been let down by the grand jury process," the statement said.

"This is a tragic situation for everyone involved," Metz said, adding that it has also taken a toll on Jerothe. "This is not something we take lightly."