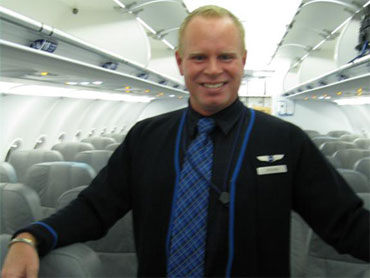 A New York City judge has granted bail for a flight attendant accused of cursing out a passenger on an airplane public-address system, grabbing some beer from the galley and exiting on an emergency slide.

Defense attorney Howard Turman asked a judge in Queens Tuesday to release him without bail.

The judge instead set bail at $2,500. Slater smiled slightly as he was escorted into the courtroom.

Police say Slater lost his temper after a rule-breaking passenger insulted him, then apparently struck the flight attendant in the head while removing a bag from the overhead compartment.

Upset, Slater asked for an apology, and instead, the passenger told Slater off.

Slater departed the plane (and, it seems, his aviation career) by opening an exit door, inflating the plane's evacuation slide, and sliding away, beer in hand.