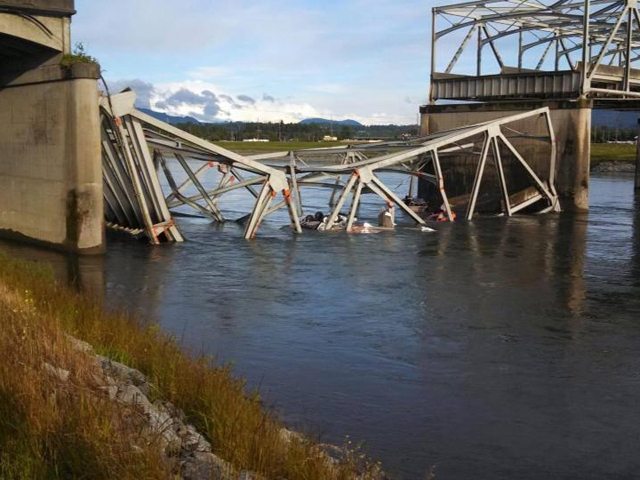 MOUNT VERNON, Wash. An Interstate 5 bridge over a river north of Seattle collapsed Thursday evening, dumping several vehicles into the water as authorities investigated the cause of the collapse that cut off the state's main north-south thruway and sent three people to the hospital.

Authorities said no one was killed and the extent of the injuries of the three people rescued from the water remained unclear, said Marcus Deyerin, a spokesman for the Northwest Washington Incident Management Team.

A search of the river continues and a dive team was on scene as well as several rescue boats still on the river.

"We don't think anyone else went into the water," said Marcus Deyerin, a spokesman for the Northwest Washington Incident Management Team. "At this point we're optimistic."

Washington State Trooper Mark Francis said a portion of the four-lane bridge over the Skagit River collapsed about 7 p.m. It was not known what caused the collapse of the bridge about 60 miles north of Seattle in Skagit County, but the state Transportation Department said it was investigating whether an oversize load may have struck the bridge.

"That means something a little bit too tall, a little bit too wide potentially striking some of the critical structure supports that caused this bridge to collapse." Travis Phelps, a state Department of Transportation spokesman, told CBS affiliate KIRO Seattle.

A damaged red car and a damaged pickup truck were visible in the water, which appeared so shallow it barely reached the top of the car's hood.

Xavier Grospe, 62, who lives near the river, said he could see three cars with what appeared to be one person per vehicle. The vehicles were sitting still in the water, partially submerged and partly above the waterline, and the apparent drivers were sitting either on top of the vehicles or on the edge of open windows.

Rita Miller, who worked at a nearby RV park, told KIRO: "We heard the terrible noise and thought, 'What in the world was that?'" Miller remarked there "were only two people alive that we could see."

Helicopter footage aired by KOMO-TV in Seattle showed several rescue boats at the bridge collapse scene with several ambulances waiting on the shore. One rescue boat left the scene with one person strapped into a stretcher.

Crowds of people lined the river to watch the scene unfold.

"It's not something you see every day," said Jimmy O'Connor, the owner of two local pizza restaurants who was driving on another bridge parallel to the one that collapsed. "People were starting to crawl out of their cars."

He said he and his girlfriend were about 400 yards away on the Burlington Bridge when they heard "just a loud bang."

"Then we looked over and saw the bridge was down in the water," he said.

He pulled over and saw three vehicles in the water, including a camping trailer that landed upside-down, he said.

Kari Ranten, a spokeswoman for Skagit Valley Hospital, said two people who were injured in the collapse were en route to the facility. She said another person was being transported to a different area hospital.

The bridge is not considered structurally deficient but is listed as being "functionally obsolete" -- a category meaning that their design is outdated, such as having narrow shoulders are low clearance underneath, according to a database compiled by the Federal Highway Administration.

According to a 2012 Skagit County Public Works Department, 42 of the county's 108 bridges that are 50 years or older. The document says eight of the bridges are more than 70 years old and two are over 80.

Washington state was given a C in the American Society of Civil Engineers' 2013 infrastructure report card and a C- when it came to the state's bridges. The group said more than a quarter of Washington's 7,840 bridges are considered structurally deficient of functionally obsolete.