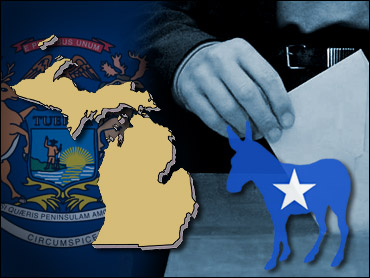 Members of the state party's executive committee issued a statement Friday saying "we have concluded that it is not practical" to conduct a party-run primary or caucus as a way to get the state's Democratic National Convention delegates seated.

Michigan and Florida were stripped of their convention delegates for moving up their primaries in defiance of party rules. Florida Democrats already had decided against holding a second primary election.

State Democrats now hope the two campaigns can agree on a way to split Michigan's pledged delegates so they can be seated at the Aug. 25-28 convention.

"We will continue to work with the working group, the DNC and the candidates to resolve this matter in a manner which is respectful of the views of Democrats in Michigan, and which is fair to those who voted in the January 15th Democratic primary," the executive committee said in its statement.

The 79 members of the executive committee include Gov. Jennifer Granholm as well as other top elected officials, union leaders and party activists. Not all were in on Friday's conference call, but the motion passed without dissent.

Michigan Democratic Chairman Mark Brewer said earlier this week that he was concerned there was not enough time to set up voting sites for an election that could have drawn at least 2 million voters. Any alternative vote would have to be completed by June 10 to be counted under DNC rules.

He also cited concerns about the cost of a second election, which he said could have hit at least $10 million, decreasing party funds.

Friday's vote capped weeks of frenzied negotiations to find a way to hold a do-over Michigan election. There was talk last month of holding a June 3 primary run by the state and paid for by private Democratic donors. But Michigan lawmakers declined to take up a bill setting up that election.

The Obama campaign has called for splitting Michigan 128 pledged delegates 50-50, regardless of Clinton's Jan. 15 win. The Clinton campaign so far has rejected that idea. Michigan also has 28 superdelegates, elected officials and other top Democrats who don't have to commit to any candidate before the convention.