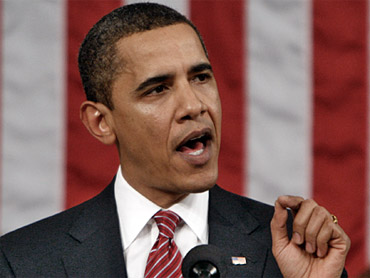 President Barack Obama said his letter to Russian counterpart Dmitry Medvedev reportedly offering to scrap plans for a European missile defense shield in exchange for cooperation in preventing Iran from acquiring long-range missiles addressed both topics but did not offer a "quid pro quo" deal.

Mr. Obama wrote Medvedev about the proposed missile defense plan, among other matters, and said Tuesday that the U.S. needs to "reset or reboot" its relationship with Russia.

Moscow regards the missile system as a threat, reports CBS News Chief Foreign Affairs Correspondent Lara Logan, but the United States has always insisted it's aimed at Iran, not Russia. The Obama administration's willingness to open discussions on the issue is a dramatic reversal of U.S. policy under President Bush, who ignored Russian objections. That dispute helped bring U.S.-Russian relations to their lowest point since the break-up of the Soviet Union nearly 20 years ago.

Better relations with Russia matter because Russia can be very helpful on a range of problems, like Afghanistan, that are high up on the Obama agenda, Logan reports.

"It seems to me that we're looking for issues on which we can signal to the Russians that we're prepared to be more flexible and listen to some of their concerns, missile defense is one," says Steven Pifer with the Brookings Institution.

A Russian foreign ministry official told CBS News's Svetlana Berdnikova that the message to the Russian president did not contain any definite proposals, but only "gives a hint" of possible steps toward improved joint efforts on Iran.

The official, speaking on condition of anonymity, said there was "nothing sensational in this letter and it is too early to make any conclusions," reports Berdnikova.

Furthermore, a White House official, also speaking anonymously, told CBS News correspondent Peter Maer that the message indicated missile defense plans would "be affected" by Russian cooperation on Iran, but did not of offer a formal deal.

Medvedev spokeswoman Nataliya Timakova said that Mr. Obama's letter was in response to one from Medvedev and that the Kremlin appreciated the "positive" spirit of Mr. Obama's message.

According to the Russian official, the Kremlin is open to such discussions only if the U.S. makes concrete proposals, reports Berdnikova. Foreign Minister Igor Lavrov plans to make that point to U.S. Secretary of State Hillary Clinton when they meet later this week, said the official.

Plans for deploying U.S. missile defenses in Poland and the Czech Republic, ostensibly to guard against Iranian attacks on U.S. allies in Europe, are among a host of issues that soured U.S.-Russia relations during the former Bush administration. There have been indications Mr. Obama, who has vowed to shake up American foreign policy, might be willing to set aside the missile defense system.

"President Obama sent a letter to Medvedev that covered a broad range of issues, including missile defense and how it relates to the Iranian threat," one senior administration official said on condition of anonymity to discuss private communications of the president.

"The suggestion is that need for missile defense deployment could become unnecessary if, working together with Russia, the Iran missile threat is addressed," the official told The Associated Press.

Mr. Obama and Medvedev were expected to meet at the G-20 economic summit of advanced and developing nations in London next month, according to the officials.

They also emphasized that "we will continue to consult with the Czechs and Poles as we move forward with decisions on missile defense." That message was an obvious attempt to ease fears among those two U.S. allies - former Soviet satellite states - who are deeply invested in the missile defense system as an assurance of American backing against a resurgent Russia.

The administration has previously hinted that the policy on the missile defense shield that former President George B. Bush fiercely advocated was open to reassessment.

On Monday, Russian Foreign Minister Sergey Lavrov urged the United States to restore diplomatic relations with Iran, Russian news agencies reported. "This would be an important element in stabilizing the situation in the region," he said.

Lavrov is scheduled to hold talks with Secretary of State Hillary Rodham Clinton in Geneva on Friday in the highest-level meeting between the two nations since Obama took office.

At a February gathering of NATO defense chiefs in Krakow, Poland, Gates said that Washington would review the missile plan "in the context of our relationship with both Poland and the Czech Republic" as well as with NATO and Russia. The language marked a departure from the tone of the Bush administration, which enthusiastically promoted the plan and signed deals last year with Warsaw and Prague.

Gates said that if Moscow really wants to stop the missile shield, it should help eliminate the threat of a missile attack from Iran.

The Obama administration has been vocal about its desire to repair rifts between the U.S. and Russia. In Munich last month, Vice President Joe Biden told a gathering of world leaders, "It's time to press the reset button and to revisit the many areas where we can and should be working together with Russia."