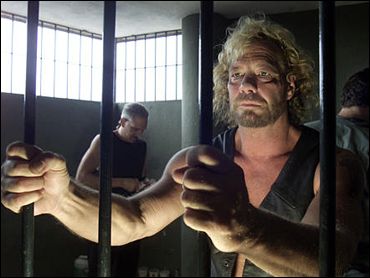 They tracked down one of California's most famous fugitives, but the Americans who caught cosmetics heir Andrew Luster in a dramatic street-corner raid may now face charges themselves.

Mexican prosecutors say they're considering a raft of charges against the unlikely team — three bounty hunters, a reality TV producer and an actor — because they should have gone to police instead of trying to whisk the convicted rapist out of Mexico for a reward.

Authorities say the group led by Hawaii-based bounty hunter Duane "Dog" Chapman seized and handcuffed Luster — the great-grandson of cosmetics legend Max Factor — as he was ordering tacos from a streetside stand before dawn Wednesday morning.

Chapman, his brother Timothy, his son Leland, reality TV producer Jeff Sells and actor Boris Krutonog were arrested about two hours later as they drove northwest out of Puerto Vallarta in two vehicles, along with Luster.

On Thursday, authorities expelled Luster to the United States, where he is appealing a 124-year prison sentence for the drugging and rape of three women.

Mexican Prosecutor Marco Roberto Juarez told a news conference Thursday that officials are considering pressing charges against his captors ranging from illegal privation of liberty — which carries a jail term of one month to four years — to more serious charges such as kidnapping and criminal conspiracy, though prosecutors have mentioned them with less frequency.

The five also might face differing charges, Juarez said, adding that his office would announce the charges — if there are any — by Friday afternoon.

Before coming to Mexico, Chapman had told reporters he hoped to reap a reward from the $1 million in bail that Luster had forfeited by fleeing during his trial. But if recognized bounty hunters have special privileges in the United States, those do not extend south of the border.

"A foreigner cannot come here and assume the functions of police and detain people," Juarez said, adding that the bounty hunter should have notified Mexican officials and let them make any arrests.

In the Jalisco state capital of Guadalajara, Gov. Francisco Ramirez said Thursday that at least some of the Americans would be charged with crimes: "They took (Luster) in handcuffs without being police, and that is not allowed by the laws of our country."

His brother, 37, and son, 26, also refused to talk about the capture, but sent greetings to their families and said they had not been mistreated.

Actor Boris Krutonog, who has had roles in films such as "The Italian Job," "Air Force One" and "Hunt for Red October," said he'd been through "an emotional roller coaster the last couple of days."

"I just hope to make it home soon to my wife and kids — and laugh again," Krutonog said.

He declined to say what he had been doing with the Chapmans.

Sells was apparently working on a television program about Chapman, 50, and called the three bounty hunters "heroes," adding that some police officers had even shaken Duane Chapman's hand.

"They took a rapist off the street and to me that's a big deal," Sells said as the suspects were brought before reporters. "This man is a serial rapist and he stalks."

Bounty hunters, formally known as "bail enforcement agents," are hired by bail bondsmen to track down people who have failed to appear in court.

According to the National Center for Policy Analysis, there are about 7,000 in the United States, although most are bail bondsmen or private investigators that work only part-time as bounty hunters.

Bounty hunters were given broad powers under an 1873 Supreme Court decision that said, bounty hunters "whenever they choose to do so" can arrest a suspect and bring him to authorities, "and if this cannot be done at once, they may imprison him until it can be done."

"They may pursue him to another state; may arrest him on the Sabbath, and, if necessary, may break and enter his house for that purpose. The seizure is not made by virtue of new process. None is needed."