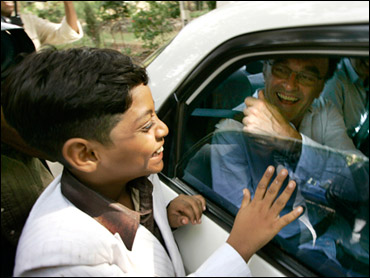 The Labor Department reported that new applications for unemployment insurance fell by a seasonally adjusted 25,000 to 376,000 for the work week ending Nov. 16. The decline left claims at their lowest level since the week ending July 20.

The latest snapshot of the labor market was much better than analysts were expecting. They were forecasting a rise in new claims.

Meanwhile, the New York-based Conference Board on Thursday reported its Index of Leading Economic Indicators was unchanged at 111.4, after falling a revised 0.4 percent in September.

The index measures where the overall U.S. economy is headed in the next three to six months. Six of the 10 indicators that make up the leading index rose in October, including building permits and manufacturers new orders for consumer goods and materials, the Conference Board said.

Neither development suggests a surging recovery, but they might be enough to sustain consumer confidence and personal spending, which have been key to preventing the slowing economy from slipping into deep recession.

"Only consumption has consistently fueled the recovery through the first ten months of this year," said Conference Board economist Ken Goldstein, cautioning that the leading indicators "are not pointing toward a more positive outlook."

Indeed, the economic recovery has been advancing this year, but in fits and starts, an environment that has made businesses wary about making big commitments in hiring and in capital investment.

Fears about a war with Iraq, the turbulent stock market and other economic uncertainties have weighed heavily on companies and have made workers who still have jobs anxious about keeping them.

Wanting to energize the economic recovery, the Federal Reserve earlier this month cut a key interest rate by a bold half a percentage point to a 41-year low of 1.25 percent. It marked the first rate reduction of this year and the 12th since January 2001.

Low mortgage rates, tax cuts, and extra cash coming from a refinancing boom have helped to support consumer spending this year, offsetting some negative factors including the roller-coaster stock market and the uncertain economic environment.

But even as layoffs slow, economists are not expecting companies to go on a hiring spree. Many economists believe companies, in the face of the weak recovery and economic uncertainties will keep their work forces lean. Rather than hiring additional help, businesses will probably work existing employees longer hours, economists said.

In fact, the boom in worker productivity during the past ten years may actually work against any increase in hiring, because companies can count on fewer workers to produce more output.

The number of unemployed people who are continuing to collect unemployment benefits dipped to 3.58 million for the work week ending Nov. 9, the most recent period for which the information is available.

While the decline was encouraging, the level of people continuing to draw claims was still high enough to suggest that a big wave of hiring isn't on the horizon, economists say.

In addition, some analysts believe many thousands of workers have already exhausted their unemployment benefits and are no longer part of the official number. The Center on Budget and Policy Priorities, a liberal advocacy group, contends that 1.5 million people have run out of benefits, a larger group than did so during the 1990-91 recession.

In addition, some economic figures released this week look less rosy. Construction of new homes sank 11.4 percent in October to an annual pace of 1.60 million from a 16-year high of 1.81 million in September, the Commerce Department estimated Wednesday.