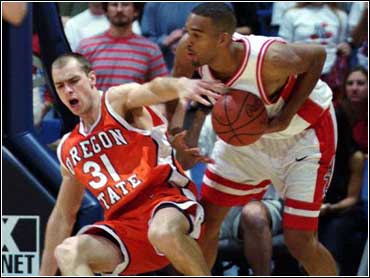 For the past 18 years, there has been one certainty in Pac-10 basketball: Oregon State always loses at Arizona.
Saturday night was no exception, not by a long shot.

Loren Woods capped a big week with 15 points and nine rebounds in an abbreviated appearance as ninth-ranked Wildcats routed Oregon State 90-73 to remain tied with Stanford for the Pac-10 lead halfway through the conference season.

"It was a pretty stress-free week," Woods said. "Against Oregon, we got a tough, physical game but we executed down the stretch. Tonight, we were able to run away a little bit more, and we were able to get some people some rest."

Woods, who tied an NCAA record with 14 blocked shots in Thursday night's victory over Oregon, left Saturday's game for good with 8:37 to play and the Wildcats ahead 64-42. He had only one block this time.

Michael Wright scored 22 for Arizona (19-4, 8-1 Pac-10), most of them long after the outcome was decided. Gilbert Arenas and Rick Anderson added 13 points apiece and Luke Walton had 12 points and eight assists.

"I thought the best players for us were Rick and Luke," Olson said. "They did a good job defensively, and they made it very difficult on their wings. We got good offensive production from them, combining for 25 points, and we also got 10 boards out of them."

The success of Walton and Anderson led to Wright's big night, because the big power forward wasn't double-teamed inside.

Brian Jackson led Oregon State with 18 points and Justin Heide and Jimmie Haywood added 12 apiece. All of Heide's points came in the second half.

Jackson was recruited intensely by Olson but chose to stay in his home state. Haywood, who once verbally committed to attend Arizona, was 4-for-4 from 3-point range. Jackson and Haywood both are freshmen.

"I wanted to do well here because they recruited me," Jackson said. "So, I tried extra hard to do well."

Up 40-30 at the break, the Wildcats scored the first 12 points of the second half to blow out to a 52-30 lead. Arenas scored six during the spurt on a stuff, a steal and layup and a 10-foot fast-break jumper. Meanwhile, the Beavers committed five turnovers in the first 4 1/2 minutes of the second half.

"There's a lack of consistency on our whole team," Beavers coach Eddie Payne said. "We need every guy to be on the same page every night. Everyone has to come to play on the same night."

The Beavers, who beat Arizona at Corvallis last season, led early but the Wildcats broke away from a 24-24 tie with a 13-0 run to go ahead 37-24 with 2:52 left in the half. Jason Gardner, just 4-for-27 shooting in his last three games, started the outburst with a 3-pointer and Anderson ended it with a running one-hander in the lane.

A 3-pointer by the Beavers' Ramunas Petraitis with 42 seconds left in the half cut Arizona's lead to 40-30 at the break.

Oregon State had 12 turnovers in the first half, eight by Tanner.

The Wildcats gave Gardner a rare rest and played walk-on John Ash some in the second half, but Ash left the game with a strained knee ligament.