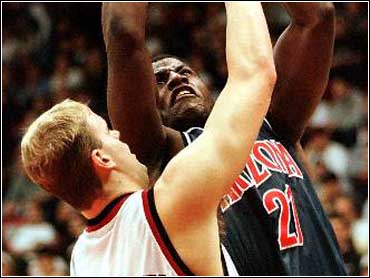 Arizona had the answers inside and outside against Washington State.

The Wildcats had 7-foot-1 center Loren Woods clogging the inside, forcing Washington State to let fly from the outside. But too many shots clanged off the rim and No. 7 Arizona rolled to a 73-50 victory.

"We had practiced on defending the perimeter. They're good 3-point shooters," said Woods, who recently tied an NCAA record with 14 blocked shots in a game. He had five Saturday night.

Washington State made just 6-of-22 3-pointers in the game, and shot just 34 percent overall, in losing its 12th straight game. Arizona has won 30 straight over Washington State, the longest winning streak in the nation among conference opponents.

Woods scored 10 points and grabbed four rebounds, but it was fear of his blocking ability that dictated the game.

"He keeps the ball up high. He's like a 10-foot guy out there," Washington State coach Paul Graham said. "We tell our guys when the shot clock goes down they should take it inside.

"But Woods is back there waiting for it," Graham said.

The Cougars had little chance of breaking the losing streak Saturday, as Arizona opened the game with a 3-point basket by Luke Walton and never trailed.

The undersized Cougars, respectful of 7-foot-1 Arizona center Loren Woods, hesitated to take the ball inside. But they also failed to connect from outside, and Woods still ended up with five blocks. Washington State has no plyers taller than 6-foot-8 Chris Crosby.

Crosby led Washington State with 14 points. David Adams had 10 for the Cougars, who shot just 34 percent in the game, compared to 60 percent for the Wildcats.

Arenas scored 11 points in the first half, including consecutive baskets that lifted Arizona to a 22-11 lead with 9:15 left. A 15-3 Arizona run over the final seven minutes have them a 39-19 halftime lead.

Washington State made just eight-of-33 field goals in the first half for 24 percent, while the Wildcats were shooting 58 percent.

"You look at our inside percentage today, with 15 out of 26 from the three inside guys," said Arizona coach Lute Olson, referring to Walton, Woods and Michael Wright. "That is credited to the perimeter people, for getting it to where we could score."

Washington State did not shoot a free throw in the first half, and Tyrone Evans sank their first one with 10:56 left in the game.

The second half started a little more evenly, but Wright's basket and two free throws lifted Arizona to a 54-31 lead with about 12 minutes left.

The Cougars have lost 15 straight Pac-10 games over two seasons and the 0-11 league mark this season is the second-worst opening in their history.