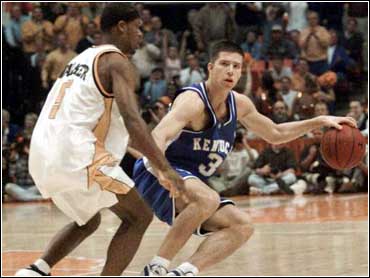 To seventh-ranked Tennessee, quicker is better.

Tony Harris scored 27 points as the Volunteers returned to their up-tempo game and beat No. 18 Kentucky74-67 Wednesday night, tying a school record for victories in a season.

"It was good to see Tony Harris and Isiah Victor back on their game," Tennessee coach Jerry Green said. "We do better when they bring their A game."

But tying the record was the least of the current Vols' concerns.

They were coming off an embarrassing loss to instate rival Vanderbilt, which slowed them down using a zone defense, and they were trying to hold onto at least a share of the lead in the SEC's Eastern Division against a team that has a winning record in Knoxville Kentucky (19-8, 9-4).

"We needed a big win to bounce back from that loss because it really hurt us down there," said Harris, who hit seven of eight free throws and six 3s after scoring just three points at Vandy.

"We didn't play the way we wanted to. We're just glad we could get this victory."

The Wildcats beat Tennessee 81-68 at Rupp Arena on Feb. 1 and looked ready to sweep the Vols as they scored the first six points.

Then the Vols, who started the game slowly bringing the ball up the floor and running down the clock, switched back to their usual high-paced game. The Vols got themselves going by fastbreaking on one end and pressing all over the court.

Kentucky led 11-7 when Harris jump-started the Vols by scoring five of the next eight points. Tennessee turned that into a 13-1 ruas Kentucky went 6 1/2 minutes without scoring a field goal, and the Vols never trailed again.

"Tennessee did a super job defensively," Kentucky coach Tubby Smith said. "We couldn't find the basket. Harris got hot early, and we never recovered. I thought we had a chance to get back in it, but no one shot consistently from the outside."

Whenever the Wildcats tried to set up for a shot, a Tennessee player was there. The Vols forced 16 turnovers, which they turned into 21 points.

Smith wasn't happy with what he called shaky ball-handling.

"On the road, you have to be mentally tough, and I didn't see that tonight," said Smith, whose Wildcats now have lost three straight SEC road games.

They pulled within 68-63 with 1:11 left on a three-point play by Tayshaun Prince. Vincent Yarbrough blocked a shot by Keith Bogans with 50 seconds left, and the Vols hit six of eight free throws down the stretch to seal the victory.

Desmond Allison led Kentucky with 15 points. Jamaal Magloire and Bogans each had 11.