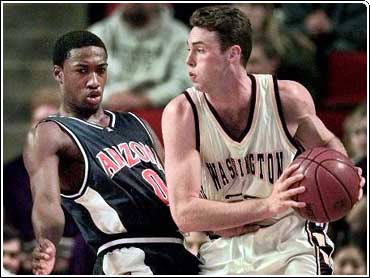 Loren Woods is not just a shot blocker. He can score big, too.

The 7-foot-1 junior center had career highs of 29 points and 13 rebounds, while blocking six shots as No. 7 Arizona withstood Washington's second-half comeback in a 65-56 victory on Thursday night.

"I knew somebody would step up," said Woods, who transferred to Arizona from Wake Forest. "It happened to be me."

"Loren was the guy at the end who put the team on his back and carried us," Wildcats coach Lute Olson said.

The Wildcats led by 20 points in the first half when the Huskies (3-7, 8-14) missed their first 10 shots and had nine turnovers in the first nine minutes.

Michael Johnson's 12-footer from the key for the Huskies cut the Wildcats' lead to 56-51 with 4:50 to play before Woods went to work. He had seven of his points in the final 4 1/2 minutes.

He sank an 18-footer with 4:30 to play and then sank two free throws with 3:54 to go after being fouled by Marlon Shelton, son of former NBA player Lonnie Shelton, to put Arizona ahead 60-51.

Down the stretch, Michael Wright had two free throws and Woods added a three-point play on a five-foot jump hook and a foul shot for the Wildcats.

The athletic Woods, who tied an NCAA record with 14 blocked shots against Oregon last week in Tucson, dazzled the undersized Huskies with 12-of-20 shooting.

The Huskies went into the game concentrating on Woods, who came into the game averaging 18 points. It didn't do much good. They thought he intimidated them in the first half.

"Who doesn't know about Loren Woods?" asked Deon Luton, who had 13 of his 19 points in the second half. "But that's no excuse for us not to be aggressive, including myself."

Gilbert Arenas had 14 points and Wright added 12 for Arizona, which beat Washington for the second time this season.

Washington coach Bob Bender, experiencing a tough season after guiding his team into two NCAA tournaments in a row, pointed out the Huskies lost the game in the first half.

"You can't dig yourself out of that kind of hole against Arizona," he said.