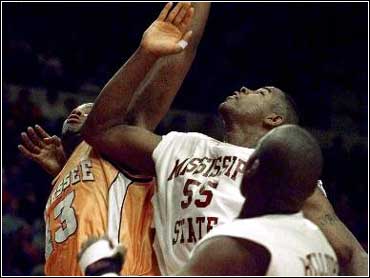 Harris scored 24 points, playing some of the game at shooting guard instead of his normal point guard spot, as No. 6 Tennessee defeated Mississippi State 88-81 Sunday.

Tennessee coach Jerry Green's experiment with Harris worked well, but the junior is not about to give up his position.

"I'm still a point guard. I'll always be a point guard," said Harris, who averages over 14 points per game. "It's just a matter of the coach trying me at some different spots to get me more shots. He wants me to score more."

Harris scored 14 points in the final 6@1/2 minutes and Ron Slay tied his season-high with 17 points coming off the Volunteers' extremely deep bench.

"They have as much experienced depth from top to bottom as anbody in the league," Mississippi State coach Rick Stansbury said. "They bring fresh legs off that bench and keep pounding you."

"He might get a little more rest at the two guard," Green said. "I don't know if that's a fact, but it might be that he has a little more energy

"We don't have to keep going with it, but I like it so far."

Tennessee lost twice last sason to Mississippi State, the second time in the quarterfinals of the SEC tournament. The Vols had dropped six of the last eight to the Bulldogs.

Tennessee power forward Isiah Victor scored 13 of his 15 in the first half and fouled out in the second half.

Slay scored 11 in the second half and hit 9-of-10 free throws overall.

"It really is good to have five post players," Green said. "You can get Isiah Victor in foul trouble, a pretty good player, and you send in Ron Slay or Marcus Haislip or Charles Hathaway and you don't miss a beat."

The Volunteers came into the game making only 65 percent of their free throws, but hit 23-of-26 against Mississippi State.

The Volunteers opened a 59-51 lead on Slay's hook shot with 11:28 left. Jackson helped the Bulldogs move back within three, scoring three times underneath in less than three minutes.

As Mississippi State's only true center, Jackson took the brunt of the punishment from Tennessee's revolving big men.

"It is real tough when they have different bodies going in and out," he said. "I tried to suck it up when I was tired."

Jackson went scoreless in the last 3:40 as the Vols pulled away.

Harris said he sensed that the Bulldogs were tiring down the stretch.

"We found when we did push the ball in transition we got easy buckets," he said.

Victor's steal led to Yarbrough's layup and Harris followed with a jumper, opening the Volunteers' lead to 70-63 with 6:31 left.

Slay's drive with 1:53 left made the score 80-72 and Harris then finished off the game from the free throw line.

"Every time they needed a play, he made the big play for them," Stansbury said of Harris.

Tennessee improved to 4-1 on the road in the SEC, the most road wins in the conference.