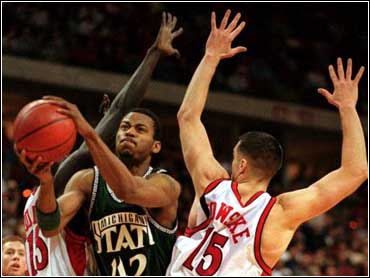 A focus on the boards helped Michigan State rebound from its loss to Purdue.

Morris Peterson had 18 points and 10 rebounds as the No. 6 Spartans kept a share of the Big Ten lead with a 61-44 victory over Wisconsin on Saturday night.

After the Boilermakers surprised Michigan State 70-67 on Tuesday night, the Spartans (18-6, 8-2 Big Ten) came back with dominant performances in rebounding and on defense.

Michigan State averages an NCAA-best 13.6 more rebounds than its opponents, and the Spartans' 50-23 rebounding advantage was the difference against Wisconsin.

"I think it was our rebounding and then making shots when we needed to," Mateen Cleaves said. "It was an ugly game, but that's how it's going to be against Wisconsin, and we just focused on the boards."

Resiliency has been a trademark of coach Tom Izzo's teams in recent years. Michigan State hasn't lost back-to-back games since December 1998, and the Spartans' average margin of victory in games after a loss is 22 points this year.

"We put a lot of preparation into this game," Izzo said. "I thought our defense got tougher tonight."

Michigan State never trailed and wasn't threatened by the Badgers, who lost for the third time in four games. Wisconsin admitted to being slightly in awe of the Spartans, who they'll visit for a rematch next Saturday night.

"They're everything you want in a basketball team," Wisconsin's Andy Kowske said. "They're bigger than us, they're quicker than us, and it showed. They're better than us in probably every category."

Michigan State exacted revenge for its 66-51 loss at Wisconsin last season, the Spartans' only conference defeat in the 1998-99 campaign.

Michigan Stte's win and Ohio State's 88-75 victory over Penn State set up a showdown for the Big Ten lead Tuesday night when the No. 5 Buckeyes visit the Spartans in East Lansing. Each team has two conference losses.

Against the undersized Badgers (12-11, 4-7), Michigan State built a 35-20 lead with a 13-2 run in the closing minutes of the first half. Peterson, who had just five points in the Spartans' loss at Purdue, had 13 first-half points and scored five straight shortly after halftime.

"We felt kind of helpless," said Maurice Linton, who led the Badgers with 10 points. "We played hard, but their talent was such a factor. They're loaded."

Jerry Richardson dunked an alley-oop pass from Cleaves that gave Michigan State a 45-28 lead with 12 minutes to play. The lead stretched to 23 points moments later as the Spartans cruised to the victory.

A.J. Granger had 11 points and 11 rebounds for Michigan State, which won even though Cleaves struggled in a 2-of-10 shooting performance.

"When we lose a game, we have a different focus in practice until our next game," Cleaves said. "Guys don't like losing here."

Mark Vershaw, Wisconsin's leading scorer, went 1-for-10 from the field. The Badgers could have used some help from Ron Dayne, who got a standing ovation when he and his Heisman Trophy made a halftime appearance at center court.

A physical game occasionally brought bad feelings between the teams to the surface. Cleaves and Vershaw had to be separated after an argument with three minutes to play, and at least two minor skirmishes erupted in the stands.

The Wisconsin student section's chants of "Alcoholic" a reference to Cleaves' troubles with the law over allegedly stealing a bottle of beer in April were nearly drowned out by chants of "All-American" from the sizable Michigan State cheering section in the upper deck of the Kohl Center.