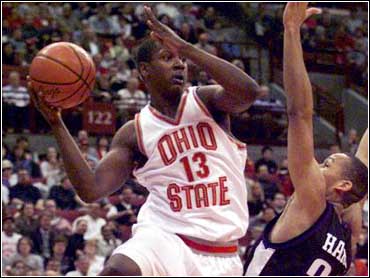 The difference between the top and bottom of the Big Ten is that the contenders always seem to save their best for last.

No. 6 Ohio State, led by Michael Redd's 25 points, overcame a shaky first half to keep Northwestern winless in the Big Ten with a 69-49 victory on Wednesday night.

"If you shoot 5-for-29 in the second half, you can't beat the Little Sisters of the Poor," Northwestern coach Kevin O'Neill said.

"In the second half our defense really took over and we were very good," Ohio State coach Jim O'Brien said. "The first 20 minutes wasn't so much about what we didn't do, other than make a few more shots. It was all about what they did do."

"I was in the flow of the offense, attacking the rim and getting to the free-throw line," Redd said. "We played hard in the first half but in the second half we played a lot harder."

A three-year starter, Redd hit 10-of-17 shots and added five rebounds, an assist and two steals. Northwestern was forced to guard him with a first-year player.

"You get a pro out there against a freshman and that's what happens," O'Neill said.

George Reese added 16 points and Brian Brown had 10 for the Buckeyes. Ken Johnson had 11 rebounds and six blocked shots along with seven points.

"We didn't want to be the team that was going to be their first victory," Reese said.

Northwestern trailed just 29-27 at the alf as seven players scored. The 27 points was dramatic improvement from the Wildcats' last game, when they mustered just six points at the half in a 63-30 home loss to Illinois on Saturday.

O'Neill said he could only imagine the tongue-lashing the Buckeyes got from O'Brien.

"I'm sure Jimmy got after them at halftime," O'Neill said.

Ohio State opened the second half on a 9-2 spurt with Redd scoring five points. Brian Brown got it started when he rebounded his own miss and Scoonie Penn added a steal and layup.

"They came out and played a great first half," Penn said. "The second half we did what we had to do."

After a Lepore 3-pointer drew the Wildcats to 48-40 with 9:15 left, Redd scored the next five points.

Northwestern, which shot just 29 percent, never got closer than 11 points again. The loss was the Wildcats' fourth in a row and 16th in their last 17 games.

Ohio State is tied with Purdue a game back of Michigan State with three games remaining.

"Any time you can win by double figures in this conference, you have to be very happy," O'Brien said. "We're having a good season, knowing full well there's a lot of games left to be played."

"They're a good team. They deserve to be the No. 6 team in the country," he said. "They've got a shot at the title if Michigan State stumbles."

Three-time All-American Jerry Lucas, who won championships in high school, college, the Olympics and the NBA, was honored at halftime when his No. 11 was retired. It was the first time that Ohio State had retired a basketball number and only the second time overall. Two-time Heisman Trophy winner Archie Griffin's No. 45 was retired last football season.