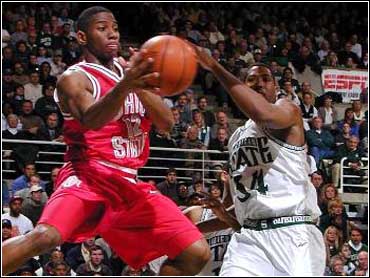 Sixth-ranked Michigan State took over sole possession of first place in the Big Ten as Morris Peterson scored 26 points and pulled down 11 rebounds in an 83-72 win over No. 7 Ohio State on Tuesday night.

This was the 25th straight win at home for the Spartans (19-6, 9-2), who are attempting to win a third straight conference regular season title.

Scoonie Penn scored 30 points for Ohio State (17-5, 8-3), which fell into a tie for second in the conference with Indiana and Purdue.

Mateen Cleaves scored 24 points for Michigan State and his one steal gave him 176 for his career, one more than the school record he shared with Scott Skiles. Charlie Bell added 23 points for the Spartans, who hit 8-of-20 from 3-point range.

Michigan State won the battle of the boards, 43-30, including a 16-8 edge on the offensive end.

The importance of this game was apparent from the opening tip. Both teams made it to the Final Four last season and played like a No. 1 seed in this season's tournament might be at stake.

Ohio State coach Jim O'Brien was ejected after picking up his second technical foul 5 1/2 minutes into the second half. Assistant Rick Boyages ran the bench the rest of the way.

The Buckeyes turned the ball over four times in the first 3:11 and Michigan State used the errors to break to a 9-2 lead.

But Penn had five points as the Buckeyes, after a timeout, went on a 9-0 run.

Two 3-point baskets by Peterson keyed a 17-4 Michigan State burst for a 26-13 lead midway through the half which the Spartans never relinquished.

Then is was Penn again as the Buckeyes' point guard scored 10 straight points to pull Ohio State to ithin 32-27 with 4:31 left in the half.

But Cleaves hit a 3-pointer and two free throws to spark Michigan State to a 44-33 halftime lead. The Spartans, aiming for their third straight conference regular season title, hit 7-of-9 from 3-point range in the first half.

Bell scored six straight points on three fast breaks as the Spartans broke to a 52-37 lead with 14:40 left in the second half.