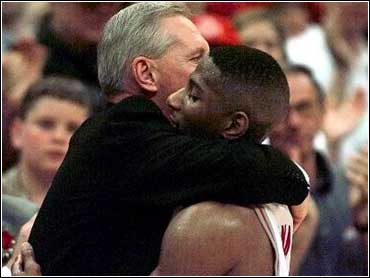 Twenty minutes of hard work made the final seven days of the regular season that much more meaningful for No. 6 Ohio State.

Rebounding from a nondescript first half, the Buckeyes used a stifling defense, Michael Redd's 21 points and a 20-3 second-half surge to get by Illinois 64-51 on Sunday.

The victory kept the Buckeyes (20-5, 11-3) in a virtual tie with Michigan State and Purdue for the top spot in the Big Ten heading into their final two regular-season games.

"The thing I like is that it's in our hands now," Ohio State coach Jim O'Brien said. "If we're good enough to do it on the road, we deserve it. And if we don't, we have nobody to blame but ourselves. We've just got to win two more games."

The Buckeyes play at Penn State on Wednesday and at Minnesota on Saturday.

"Our destiny is in our own hands now," said point guard Scoonie Penn, who scored 14 points.

A capacity crowd of 19,100 said goodbye to three senior starters

In addition, Redd's father this week said that his son might forego his final year of eligibility to make himself eligible for the NBA draft.

The fans chanted, "One more year!" as Redd shot free throws in the final minutes.

If it was Redd's final home game, he made the most of it. He also had 12 rebounds as the Buckeyes dominated the boards in the second half. He also moved into fifth place passing Jimmy Jackson

Brian Brown had 12 points and Reese finished with 11. Johnson blocked six shots and had six rebounds.

"Our defense is very good right now," said Brown, who put the claps on Illinois standout Cory Bradford, holding him to 14 points on 5-of-15 shooting from the field. "If our offense can play well, we're tough to beat. The second half we played so good on defense."

Brian Cook led the Illini with 17 points. Frank Williams, who beat the Buckeyes on a 3-pointer at the buzzer in the Big Ten opener, mustered 11 points on 3-of-15 shooting.

The Illini, shooting 44 percent for the season, hit just 18-of-59 shots from the field for 31 percent.

"They played a great defensive game and they attacked us offensively and were much more aggressive in the second half," Illinois coach Lon Kruger said. "Ohio State's defense was outstanding and they got all the loose balls with their hustle."

The Buckeyes won the rebounding battle 40-30, outrebounding the Illini 15-4 during their second-half spurt.

A Cook basket staked Illinois, which had led by as many as eight points in the first half, to a 38-34 lead with 16:20 remaining.

But the Illini would miss 19 of their final 23 shots from the field and would score only three points and hit one field goal over the next nine minutes.

"Our guys deserve credit for how they guarded a very good team," O'Brien said. "I think the second half was our best effort this season to keep Illinois to 21 points and 24 percent shooting in the second half is great."

Rebound follows by Reese and Brown pulled the Buckeyes even before Penn gave them the lead for good on two foul shots with 13:11 left. Penn later stole the ball and hit the perimeter jumper at the other end to cap a 12-0 run for a 46-38 lead at the 10:18 mark.

After Lucas Johnson hit a 3-pointer to break the Illini's six-minute scoring drought, the Buckeyes ran off the next eight points to build the lead to 54-41 with 7:18 remaining.

"This keeps us in the hunt in the Big Ten," Johnson said. "The race for No. 1 is very close. Now we have to win our games down the stretch to stay in it."