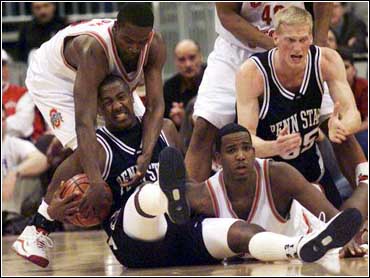 Doylan Robinson was an unlikely hero for Ohio State.

After playing only 21 minutes in the previous 12 games, Robinson came off the end of the bench to play solid defense and score a career-high 10 points as No. 5 Ohio State beat Penn State 88-75 Saturday.

"I didn't know I would get this much playing time," Robinson said.

Four Buckeyes scored more points, but it was Robinson's play that received the most praise after the game.

"He played huge for a guy who doesn't play a lot," said Michael Redd, who led the Buckeyes with 25 points.

Redd is accustomed to torturing Penn State, having averaged 26.8 points in his four previous games against the Nittany Lions. He had not shot better than 50 percent in nine of his previous 10 games, but made 9-of-17 shots and 7-of-10 free throws to match his season scoring high.

Yet Robinson, who led the Buckeyes with eight rebounds, still commanded a lot of attention.

"Doylan was the man," said Scoonie Penn, who had 17 points and seven rebounds for Ohio State (17-4, 8-2 Big Ten). "He got the big congratulations and the high-fives today. He was definitely the difference."

His play couldn't have come at a better time for the Buckeyes who assured themselves of having at least a share of first place in the conference going into their showdown at No. 6 Michigan State Wednesday.

Joe Crispin, who matched teammate Jarrett Stephens with 25 points, had 13 at halftime as the Nittany Lions (12-9, 4-6) held a 35-33 lead after leading by as many as seven points before Robinson started guarding Crispin.

Crispin wasn't a factor in the second half with the taller Robinson applying the pressure on defense.

"He gave us a spark," Ohio State coach Jim O'Brien said. "It seemed he was bothering him a little."

Penn State coach Jerry Dunn said, "The first half we were consistent on offense and then in the second half, after we went through our first and second options, a lot of our shots didn't fall."

Meanwhile, Ohio State's offense perked up after an abysmal performance in Wednesday night's 67-64 upset loss at home to Iowa.

The Buckeyes shot 61 percent in the second half hitting 10 of their final 11 shots and finished at 56 percent, their best shooting performance in almost two months. They pulled away to lead by as many as 16.

Another substitute, sixth-man George Reese, scored 21 points on 7-of-10 shooting from the field and 7-of-8 from the line. Ken Johnson added 11 points and eight blocked shots.

A Redd layup and a Reese turnaround tied the score. After Johnson blocked a shot by Stephens, Reese scored off a fastbreak assist from Penn, giving the Buckeyes the lead for good.

Titus Ivory and Crispin missed 3-pointers for the Nittany Lions while Johnson, then Redd each made a pair of free throws to cap a 10-0 run. The Buckeyes finished 24 of 29 at the line, a marked difference from Wednesday night's loss when they were 14 of 27.